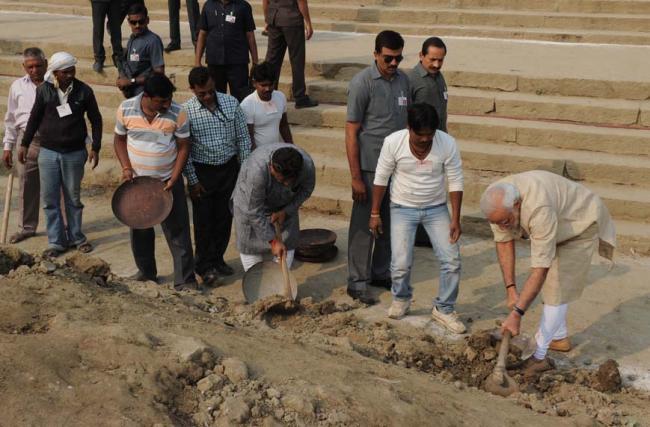 Closure of tanneries along Ganga River

New Delhi, Dec 21 (IBNS): Union Minister of State for Water Resources, River Development and Ganga Rejuvenation, Dr. Satya Pal Singh in a written reply in Lok Sabha, on Thursday, said that the Government has intensified its efforts for pollution abatement of river Ganga.

Cleaning of river Ganga is being carried out through various activities including treatment of municipal sewage, treatment of industrial effluent, river surface cleaning, rural sanitation, afforestation & bio-diversity etc, he said.

The municipal sewage being generated in cities on banks of Ganga is being managed by a mix of Interception & Diversion projects, sewerage network and Sewage Treatment Plant (STP) projects.

Over 3,000 million litres per day (MLD) of sewage is generated by the towns situated on the main stem of river Ganga, the minister said.

Against this, sewage treatment capacity available is 1,580 MLD.

National Mission for Clean Ganga has sanctioned projects for creation of additional 1,570 MLD capacity and these projects are at various stages of implementation.

The minister, in his reply, mentioned that the National Green Tribunal (NGT) in its final judgement order in the matter of M.C. Mehta vs. Union of India dated July 13, 2017 had stated that the state of Uttar Pradesh (UP), UP Jal Nigam and Uttar Pradesh State Industrial Development Corporation (UPSIDC) with due consultation with Director NMCG and Central Pollution Control Board (CPCB) shall submit a complete project report giving time bound program for completion of the project related to augmentation and up-gradation of conveyance drains, Primary Effluent Treatment Plants (PETPs), Common Effluent Treatment Plants (CETPs) and Common Chrome Recovery Plant (CCRP) at Jajmau in Kanpur, Banthar and Site-II in Unnao in a period of six weeks.

The NGT had said that the work on such project report should start in four months and the project should be complete and made operational in all respects without exception within two years from the date of pronouncement of this judgment.

In the event, the above direction is not carried out in its true spirit, then the tannery industries at Jajmau shall be directed to be shut down and shifted to a new industrial site, which is fully developed or to be developed having provisions for CETP and Common Chromium Recovery Plant.

The NGT  had also observed that even after spending Rs.7304.64 Cr. upto March, 2017, by the Central Government, state Government and local authorities of the state of UP, the status of river Ganga has not improved in terms of quality or otherwise and it continues to be a serious environmental issue.

The task of cleaning Ganga is undertaken by different authorities under different programme/schemes.

NGT vide its order dated Aug 7, 2017, had noted that the Central Government and state government of Uttar Pradesh had released an amount of Rs. 6,691.55 crore, the minister said.