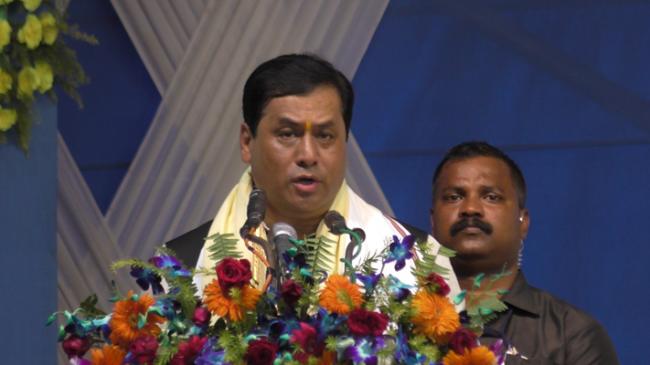 Guwahati, Dec 20 (IBNS): In a bid to associate the pravasi Assamese living in Karnataka with the State’s transformation into a new growth engine for a new India, Assam Chief Minister Sarbananada Sonowal appealed them to lend their hands and be a part of the new journey of the state towards prosperity.

Interacting with the Assamese diaspora in Bengaluru on Tuesday evening, Sonowal made an ardent appeal to all living in Karnataka to lend their expertise and contribute to the forward march of the state.

“Your profession might have kept you away from your home state. However, the distance should not be a bar for you in becoming an active partner of the state’s journey to growth,” Sonowal said.

Giving a brief outline of the immense potentials of the state in almost all the sectors, Sonowal apprised them of the State Government’s initiatives of charting a new growth mantra of judiciously tapping the resources of the State and requested the Assamese diaspora to extend their cooperation in government’s bid in repositioning Assam as the springboard for India’s Act East Policy.

He emphasised that the Centre’s new Act East Policy as the natural corollary has given the State several opportunities to become the gateway to 10 South East Asian Countries.

Moreover, Assam’s geographical proximity with the ASEAN countries has presented vibrant markets with nearly 80 crore consumers to be served. In this backdrop, State Government would organise a Global Investors’ Summit in Guwahati on February 3-4, 2018 to elicit investments from all the potential business houses, Sonowal added.

Sonowal said that, Assam is proud of its natural resources and lush green environment and the state government is committed to bolster an economic growth in sync with its ecology without disturbing the environment.

He also sought the cooperation of all living in Karnataka to extend their helping hands and be an active partner of the state government’s bid to make Assam one of the fastest growing economies and put it (Assam) among the five most developed states of the country.

Sonowal urged them to be an ambassador of goodwill between Assam and Karnataka.

Information and Technology Minister Keshab Mahanta also interacted with the Assamese diaspora on the occasion.