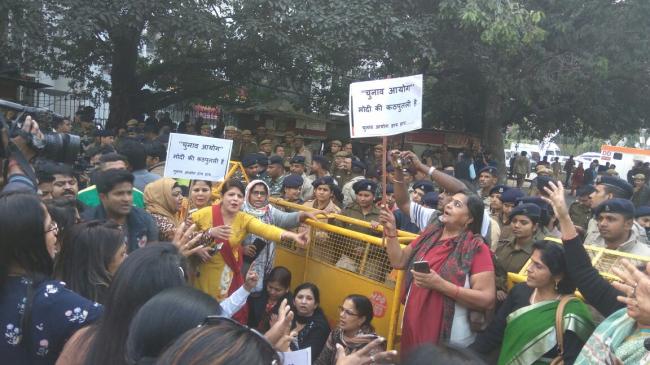 New Delhi, Dec 14 (IBNS): The Congress party on Thursday slammed the Election Commission for not taking action against Prime Minister Narendra Modi and Bhartiya Janata Party (BJP) leaders for the controversial roadshow which allegedly violated the model code of conduct.

In a strongly worded complaint letter to the EC, the Congress claimed that the Commission is "naked prejudiced" towards the BJP.

"Tragically, naked prejudice of Election Commission and failure to act against the Prime Minister and BJP leaders is writ large," the letter read.

The controversy arose after the PM cast his vote in Ahmedabad's Rapin, came out of the booth and flashed his inked finger at the waiting crowd that cheered him.

Modi also hit the streets in a car drawing huge applauding partisan people around- an event that Congress calls a "mini roadshow" held in contravention of the election code of conduct.

“It is a sad letter day in India’s history for the position of Election Commission of India as an independent arbiter stands compromised,” the Congress’s letter to the EC read.

The letter further said: "Not only was the law of restriction on number of people near polling booth breached with impunity but with active complicity of the administration/police machinery/SPG, a road show was also held with BJP flags in utter disregard of poll code and the law.”

The Memorandum which was submitted by the Indian National Congress to the Election Commission of India today on the violation of the Constitution, Code of Conduct and abdication of authority by PM Modi and BJP. pic.twitter.com/2aabklAXqG

Earlier in the day, as a mark of protest, Congress supporters gathered in front of the EC office in the national capital demanding action against the PM, while a high-level  BJP delegation reached the poll panel's headquarters.

The Congress also sought an FIR against PM Modi and other BJP leaders.

Following the controversy, the Election Commission has sought a report from district collector on the alleged roadshow.

This comes after the EC on Wednesday issued a notice to Congress' President-elect Rahul Gandhi for giving an interview to a television channel during the election, the Congress turned more incensed as the PM "got away" allegedly flouting the same rules.

While former Union Minister P Chidambaram alleged that the EC is "sleeping" on its job, other party leaders were more scathing.

"Will expose the ‘double standards’ of an Election Commission subservient to whims of BJP and the entire scam on NPA’s," AICC spokesman Randeep Singh Surjewala tweeted.

" PM holds a road show & pliable agencies subvert the Constitution. Is the EC acting as PS to PM abdicating its Constitutional duties?" he said.