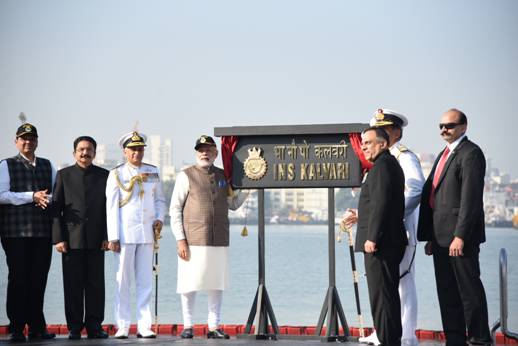 Mumbai, Dec 14 (IBNS): The central government accords highest importance to the Indian Ocean region, guided by the principle of Sagar (Security And Growth for All in the Region), said Prime Minister Narendra Modi while commissioning INS Kalvari (S-21), the first of the six Scorpene class submarines built under Project 75 (Kalvari Class) into the Indian Navy at a ceremony held at Naval Dockyard, Mumbai, on Thursday.

The 21st century is Asia’s century. Our Government accords highest importance to the Indian Ocean region, guided by the principle of Sagar - Security And Growth for All in the Region. https://t.co/6wjN1InTqU

The event marked the formal induction into the Navy of the first of the six submarines being constructed at Mazagon Docks Ltd., in collaboration with the French builder, Naval Group.

Upon arrival at Naval Dockyard, Mumbai, the Prime Minster was received by the Chief of the Naval Staff.

The Prime Minster was presented a 100-man Guard of Honour and was introduced to the ship’s officers and other dignitaries present.

Congratulating the MDL for restarting the production line of submarines once again, Defence Minister Nirmala Sitharaman, thanked the Yard workers, who she said “mattered high on this day”.

The process of submarine construction has again been started in the country and it should not stop, the Defence Minister said.

She emphasized the need to avoid episodic starts and stops in the industry and maintain a pool of skills needed to build high technology platforms within the country, sustenance of which will lead to a virtuous cycle of betterment for Indian industry, retention of skills and better peace dividends to the nation.

Welcoming the gathering, Admiral Sunil Lanba said that this commissioning marked a milestone in the journey of the Indian Navy towards indigenous submarine building.

The Indian Navy is deeply committed to the principle of indigenisation and the Government’s thrust on ‘Make in India’; he said.

"Commissioning of Kalvari is a testimony of our resolve and these achievements are a result of the Indian Navy’s proactive and integrated approach to achieve self-reliance," the Admiral said.

The Commissioning Warrant of the submarine was thereafter read out by the Commanding Officer, Captain SD Mehendale.

INS Kalvari is manned by a team comprising eight officers and 35 sailors with Captain SD Mehendale at the helm as her first Commanding Officer.

The commissioning will augment the offensive capability of the Indian Navy, and the Western Naval Command in particular.