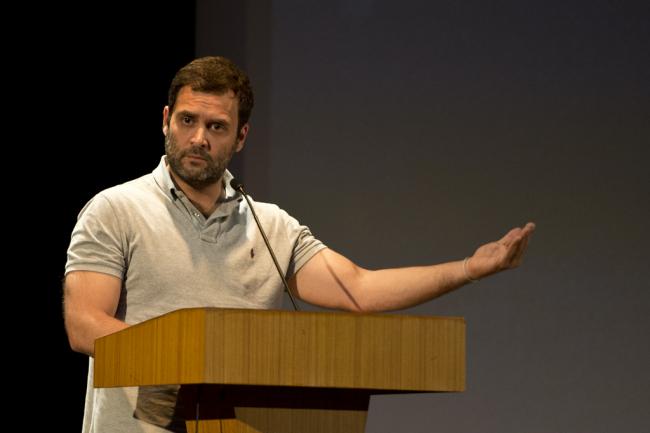 New Delhi, Dec 13 (IBNS): The Election Commission of India (ECI) on Wednesday issued a notice to Congress President Rahul Gandhi asking why action will not be taken against him for violating the Representation of the People Act, hours after several TV channels aired his interview on Gujarat polls.

On Wednesday, some of TV channels in Gujarat have displayed an interview given by Rahul Gandhi about Gujarat election, a day ahead of the second phase of poll.

The notice has been issued for “prima facie” violation of Section 126(1) (b) of the Act by Gandhi as he gave such an interview.

In a statement, the ECI said, "Such display of your interview falls within the definition of 'election matter' under Section 126 (3) of Representation of the People Act, 1951 and display of such election matter within 48 hours ending with hour fixed for conclusion of poll in the poll going areas, amounts to violation of Section 126 (1)(b) of Representation of the People Act, 1951."

The Commission directed the Chief Electoral Officer of Gujarat to initiate necessary action by filing FIR against those who have violated the above mentioned provisions in phase 2 Districts in Gujarat going to poll on Thursday.

The EC has given Rahul an opportunity to explain himself by 5 PM of Dec 18.

"Now, therefore, the Election Commission hereby gives you an opportunity to explain by 5:00 PM of 18th December, 2017 as to why action should not be taken against you for violating the aforesaid of the Model Code of Conduct, failing which the Commission will decide the matter without any further reference to you," the statement added.

Those TV channels which violated the provisions of Section 126 (1)(b) by displaying the said election matter in phase 2 district in Gujarat have also been directed to forthwith stop the display of such matter.