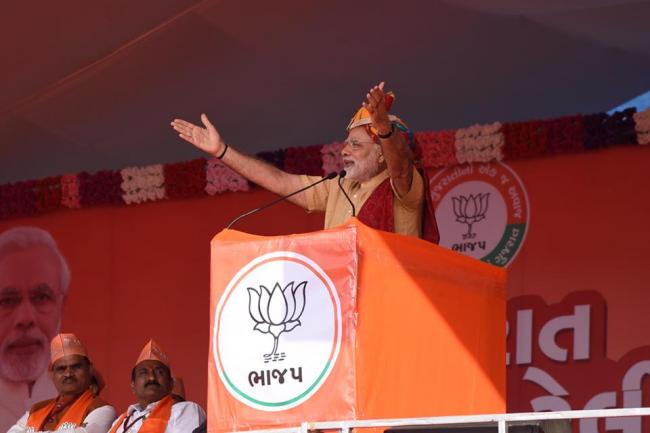 Ahmedabad, Dec 12 (IBNS) Prime Minister Narendra Modi arrived in Dharoi Dam in Mehsana district of Gujarat as scheduled and is on his way to the famous Ambaji Temple in North Gujarat, about about 180 km by road,  to renew his campaign for the Gujarat Assembly polls.

The Gujarat poll campaign comes to an end on Tuesday, with the second phase of the two-day polling scheduled on Thursday.

The PM flew in a seaplane from Sabarmati river in Ahmedabad to Dharoi dam in Mehsana district on Tuesday.

After the first phase of polls in Saurashtra and South Gujarat last Saturday, BJP is going all out to focus in North Gujarat as one of the bitterest war of words between BJP and Congress played out.

Earlier, Modi's roadshow in Ahmedabad was denied permission owing to traffic situation. Media reports said roadshows of both the PM and Congress president-elect Rahul Gandhi were denied permission for the same reason.

Reports said Rahul Gandhi will hold a press conference in Ahmedabad to end his campaign.

While Modi is showcasing the development work in Gujarat to seek a fifth consecutive win for the BJP in Gujarat, Rahul Gandhi's Congress is citing the same model of development as a failure in the high profile Gujarat poll campaign.

The Gujarat campaign witnessed big accusations from both sides with even the issue of Pakistan's intervention drawn in.

Manmohan Singh later said he was "deeply pained and anguished" by the "falsehood and canards being spread to score political points by none less than Prime Minister Narendra Modi". He also demanded an apology from the PM.

The former PM's remarks were countered by Union Finance Minister Arun Jatley, who said the dinner was a " political misadventure".

Gujarat, which is undergoing a two phase assembly election, witnessed 66.75% turnout in the first phase. The second and final phase for the remaining 93 seats will be held on Dec 14. In the first phase, 89 Assembly seats went to polls.

The votes will be counted on December 18.