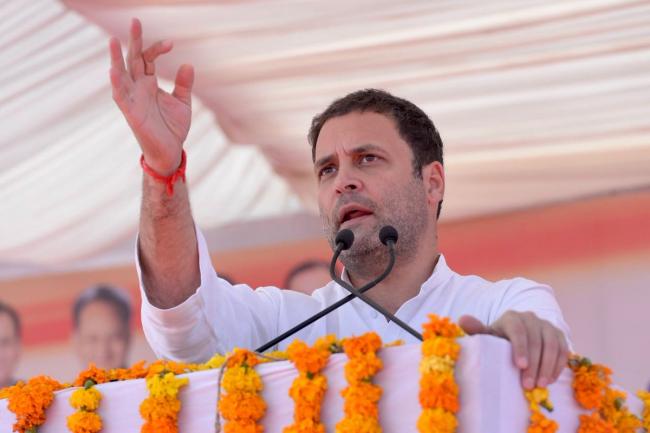 Palanpur, Dec 11 (IBNS): Congress vice president Rahul Gandhi on Monday hit out at Prime Minister Narendra Modi for his recent comment on Pakistan and said he should speak more about Gujarat elections and the state's development than about other nations.

Addressing an election rally, Gandhi said: "He keeps speaking about China, Pakistan and Japan. I feel that this is the election of Gujarat state and he should speak about this state and its development too."

Prime Minister Narendra Modi's allegation during his Gujarat poll campaign on Sunday -- that Pakistan was trying to meddle in Gujarat elections -- has given rise to a lot of debate, according to media reports on Monday.

PM Modi raised the issue of the dinner thrown by Mani Shankar Aiyar and suggested that the Congress was conspiring with Pakistani leaders to prevent the BJP from winning the election in Gujarat, where the party has been in power for 22 years, media reported.

Meanwhile in a tweet on Monday, Pakistan's spokesperson for the Ministry of Foreign Affairs, Dr Mohammad Faisal, said, "India should stop dragging Pakistan into its electoral debate and win victories on own strength rather than fabricated conspiracies, which are utterly baseless and irresponsible."

The Congress has demanded an apology for the charge, media reported.

Rahul Gandhi, commenting on the PM's allegations, said that Prime Minister Modi needs to talk about Gujarat and not Pakistan. He also said that the PM talks about the Congress in half of his speeches, media reports said.

Veteran Congress leader P Chidambaram tweeted, "Is winning an election so important that such allegations can be made against a former Prime Minister and a former Vice President?"

However, India's Law Minister, on Monday not only condemned the "unwarranted" statement by Pakistan on Gujarat elections but also said that that it was aimed at bailing out Congress party, according to media reports.