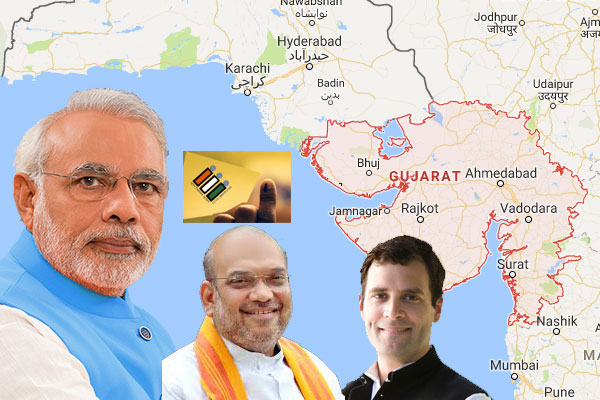 I am seeing historic victory for BJP in Gujarat: Modi

After the ending of the first phase of polling, Modi thanked people for exercising their franchise.

"Thank you Gujarat! Gratitude to my sisters and brothers of Gujarat for voting in record numbers today. I am seeing that BJP is headed towards a historic victory, powered by the affection and support of every Gujarati," Modi tweeted.

Around 68 percent voters cast their votes as the first phase of the Gujarat elections ended on Saturday.

Gujarat voted to elect a new Assembly on Saturday.

Kutch, Saurashtra and South Gujarat went to polls for 89 of the 182 seats in this phase of voting.

Polling was disrupted for the time being in a number of booths in Surat following glitches in voting machines.

Reports said around  70 Electronic Voting Machines were reported to be malfunctioning in Gujarat.

Gujarat Chief Minister Vijay Rupani and his wife Anjali Rupani were among the first to cast their votes from Rajkot.

The Chief Minister is contesting from Saurashtra's Rajkot-West constituency, making the affairs most high profile.

His main challenger is Indranil Rajyaguru, the richest man in the state assembly.

The state election is being viewed as an acid test for both  Narendra Modi and Congress Vice President Rahul Gandhi.

While the ruling Bharatiya Janata Party (BJP) is fighting hard to retain their stronghold in the state, the Congress is trying to return to power after 22 years.

The Congress is fighting the election in an alliance with Hardik Patel-led Patidar Ananmat Andolan Samiti (PAAS).

Like the Prime Minister, Rahul too urged all Gujarat voters to turn out in large numbers along with a special reference to the young generation.