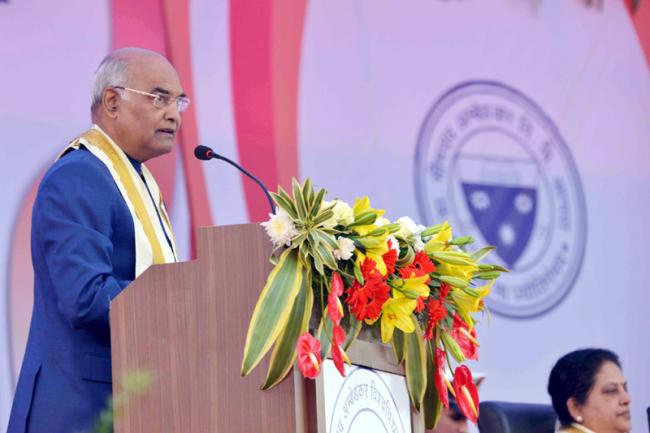 He also laid the foundation stone for the E-Classroom Complex and Incubation Centre.

Speaking on the occasion, the President said that it is extremely satisfying that the Andhra University, in particular its College of Engineering, is engaged in R&D projects with defence institutions.

He noted that the Centre for Defence Studies will focus on cybersecurity, nanotechnology, radar and communications, corrosion technology, and other technologies that have strategic dimensions.

The President noted that professors and researchers from the Andhra University are collaborating on specific projects with DRDO as well as with the Naval Research Board and other institutions.

"Professors from Andhra University have been used as R&D consultants for missile projects, including in the development of the Brahmos missile. Additionally, expertise from this University has been sought by the Eastern Naval Command, headquartered in Vishakhapatnam, for civil engineering structural applications and corrosion related issues," he said.

"Research related to defence and military applications and technologies will have multiple benefits for our country. It will provide a tonic to the effort to Make in India. And as experience in other countries has shown, research in defence technologies can also lead to innovations that have diverse civilian applications," said Kovind.

The President said that the overall gender imbalance in our scientific and technological institutions continues to be a concern.

The President said that a true test of India’s progress is in the access and opportunity we provide our daughters when it comes to education.

He pointed out that some of our leading defence and space scientists - who have powered our missile programmes and our rocket launches - are women.

He said that he had the privilege to felicitate the senior DRDO scientist Dr Tessy Thomas, known as the “Missile Woman of India”, earlier this week in Agra.

"Women achievers like her are role models for our youth, particularly for our girl students," said he.