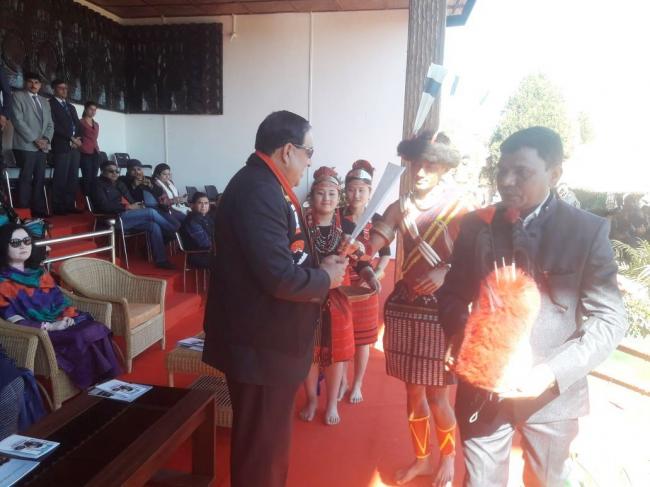 The General officer reviewed the operational preparedness of the Assam Rifles in Nagaland.

The Director General of Assam Rifles was briefed on the prevailing security situation in the State including the employment of Assam Rifles and other Security Forces and the co-ordination between all organs of the government.

During his visit, the Director General stressed on the need for synergy of effort at all levels and commended all Officers, Junior Commissioned Officers and Jawans for their untiring efforts towards ensuring peace and tranquility in the State.

During his stay in Nagaland, the Director General Assam Rifles also visited  the Hornbill event as the Chief guest on Sunday wherein he expressed his joy to be a part of the festival and extended warm greetings to all.

He also complimented the people of Nagaland for organizing such a marvelous festival wherein addressing the locals, DGAR said that the unique, rich, varied and vibrant culture of Nagaland showcased today as a perfect mélange of cultural displays has left me spellbound and mesmerized.

"I am aware that your culture is not only about colourful costumes, dances and songs, but is also reflective of strength, honesty and simplicity of the society and the great warrior tradition which runs in the blood of every Naga. This cultural heritage must be preserved and promoted for our future generations to follow and to set an example for our fellow countrymen to emulate," The DGAR said.

DGAR and all ranks of Assam Rifles extend very warm greetings to people of all the communities of Nagaland on “Horn Bill Festival”.

DGAR also conveyed sincere prayers to the almighty to “keep a benign eye on the people of Nagaland to bring about peace, prosperity and tranquility in the days to come”.