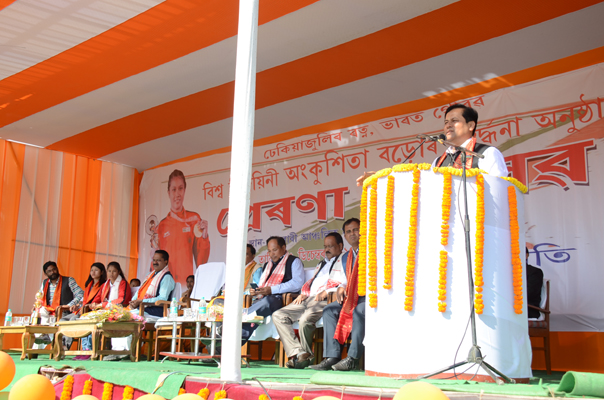 Guwahati, Dec 1 IBNS): Assam Chief Minister Sarbananda Sonowal called upon the youth of the state to take up sports as a way of life.

The Assam CM said this while taking part as chief guest in the felicitation programme of gold medallists and Boxer of the Championship of AIBA World Youth Women Boxing Championship Ankushita Bodo in a programme held at Thelamara in Sonitpur district on Friday.

The programme was organized by Prerona Utsav Udjapan Samiti.

Speaking on the occasion, Chief Minister Sonowal said that, Ankushita Bodo’s feat in world boxing will attract youth towards sports in Assam.

“By defeating the Russian Boxer in the final match, Ankushita displayed India’s women might in the world platform. All Indians, especially the women must draw inspiration from her success and take up sports as a way of life,” Sonowal said.

Underscoring the important role of parents, teachers and society as a whole in promoting sports talents, Sonowal also called for synergy between effort of the government and private organizations for growth of sports and added that this has already been testified by the nations which have excelled in sports.

The Assam CM also highlighted the struggle and achievements of ace pugilist MC Mary Kom and termed her as a role model for millions of Indian women.

Sonowal reiterated the state government’s commitment for scouting rural sports talents and providing them a better platform for honing their skills.

He informed that government would carry forward its resolve by upgrading the sports infrastructure in the state and said that steps are afoot to set up a Sports Academy in Assam.

Sonowal also mentioned that the state government has decided to provide an amount of Rs 10 lakh to Ankushita Bodo as recognition to her excellent achievement and added that Assam government would take responsibility for her better training.

He further said that the state government would extend all support in setting up an Indoor Hall for promotion of sports at Thelamora area.

President of Bodo Sahitya Sabha, Director, SAI, President of Assam Boxing Association, Chairman of Assam Textbook Publication Board Rajen Borthakur and host of other dignitaries were also present in the felicitation programme.