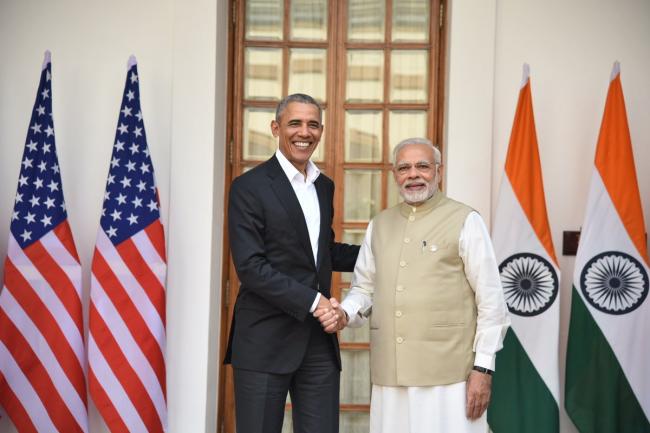 The two leaders had earlier met several times during Obama's tenure as the President.

"It was a pleasure to meet, once again, former President @BarackObama, and learn about the new initiatives being taken forward under his leadership at the @ObamaFoundation and his perspectives on further strengthening India-US strategic partnership," Modi tweeted.

Stressing on tolerance and unity, former US President Barack Obama on Friday said India should nurture its large Muslim population that thinks of itself as Indian.

Speaking at the 15th edition of the Hindustan Times Leadership Summit in New Delhi, Obama also warned against “the distinction between ‘us’ and ‘them’ is dangerous and can wreak havoc on us all”.

“For a country like India where there is a Muslim population that is successful, integrated and considers itself as Indian, which is not the case in some other countries, this should be nourished and cultivated,” he said.

Talking about multiculturalism, the former Prsesident said this is a common bond between the US and India.

“I think his (Modi’s) impulses are to recognise the Indian unity. I think he firmly believes unity is necessary for the progress of the nation.”

Obama said he had emphasised the need for religious tolerance and the right to practice one’s own faith during closed-door talks with Prime Minister Narendra Modi during his last trip to India in 2015.

Replying a question on his relationship with Prime Minister  Narendra Modi and his predecessor Manmohan Singh, Obama said he shared different but friendly relations with both leaders.

He said both showed political courage and resolve to solve global problems.

“I like him (Narendra Modi) and I think he has a vision for the country. He is implementing and in many ways modernising certain elements of bureaucracy. But, I was also great friends with Dr Manmohan Singh,” he said.


Praising Modi, Obama said the Indian Prime Minister played a crucial role in reaching the Paris Climate accord, which was a "great achievemnt."

Obama, however, stopped short of mentioning US President Donald Trump, who had decided to walkout of the  Paris accord, held to take measures to curb  global warming.