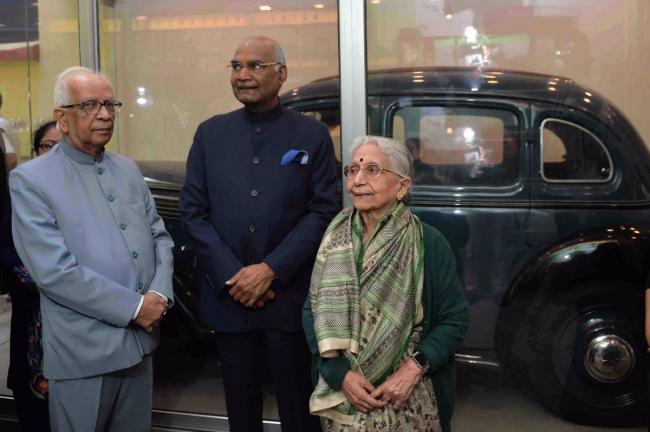 Later, he addressed the closing ceremony of centenary celebrations of the Bose Institute in Kolkata.

The President arrived in the city on Tuesday.

The President  was accompanied to the Jorasanko Thakurbari by Governor of West Bengal, Keshari Nath Tripathy and Vice Chancellor of Rabindra Bharati University, Sabyasachi Basu RayChaudhury.

The President, who visited the various rooms on the premises and closely observed the Tagore memorabilia, later said it was a great experience for him.

President Kovind paid floral tribute to Gurudev Rabindranath Tagore in the rooms where he was born and where he passed away.

"Was moved by the aura of sacrifice and dedication to India. Netaji is cherished, remembered and missed to this day all over the country," he said.

At the Bose Institute, the President said that it occupies a unique and exalted position in the landscape of Indian science.

"This was one of the earliest scientific institutes to be established in the country. It has served the cause of science and served the cause of India. It has contributed much to research in the biological and physical sciences. At the same time, this Institute has had a very active social outreach programme in rural Bengal through its rural bio-technology initiative. It has also been pursuing educational uplift programmes for school children in various states of the Northeast. Truly, it is making an honest effort to spread the culture of science and innovation down to the grassroots of our society," the President said.

The President said that Bengal was one of India’s earliest industrial and manufacturing economies.

With that legacy, and with its educational institutions, it should have led the IT revolution in our country, he said.

"But for whatever reason, it was a slow starter in IT and IT-enabled services. That boom moved to other states, such as those in the south of our country. Now Bengal has another chance. We are in the midst of an explosion of digital technologies. Cutting-edge disciplines like precision manufacture and bio-informatics are changing the way we work. And robotics is changing the way we live," President Kovind said in his address.

The President said that all this throws up great opportunities for Bengal, for Bengal’s science, and for Bengal’s talented pool of young scientists.