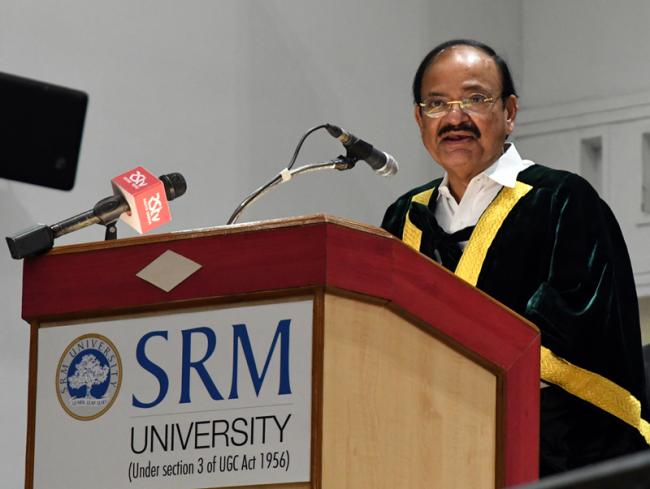 He was addressing the Special Convocation 2017 of SRM University, in Chennai, Tamil Nadu on Thursday.

Governor of Tamil Nadu Banwarilal Purohit, Minister for Higher Education of Tamil Nadu K.P. Anbalagan and other dignitaries were present on the occasion.

The Vice President said that the vision of higher education in India is to realize the country's human resource potential to its fullest with equity and inclusion.

He further said that this essentially means providing greater access to higher education for all sections, particularly the vulnerable sections of the society.

"Higher education in India is passing through a phase of unprecedented expansion, marked by an explosion in the volume of students, a substantial expansion in the number of institutions and a quantum jump in the level of public funding," he added.

The Vice President said that education is the single most important element in converting our young population into national assets.

"If the younger generation of our nation is empowered, it will constitute a very strong and productive workforce for the coming years," said Naidu.

The Vice President said that India was once known as ‘Viswaguru’ and was the global center of learning as knowledge-seekers from all corners of the world used to come here and study at Takshashila, Nalanda and other centres of learning.

"The situation has changed following Mughal invasions and the British colonization and now the time has come for India to once again emerge as the global knowledge hub," he said.

The Vice President quoted Mahatma Gandhi as saying “By education, I mean an all-round drawing of the best in child and man in body, mind and spirit”; “Education which does not mould character is absolutely worthless”.

"As the Mahatma had rightly emphasized character is the most important quality for an individual to chart out the right path," he added.