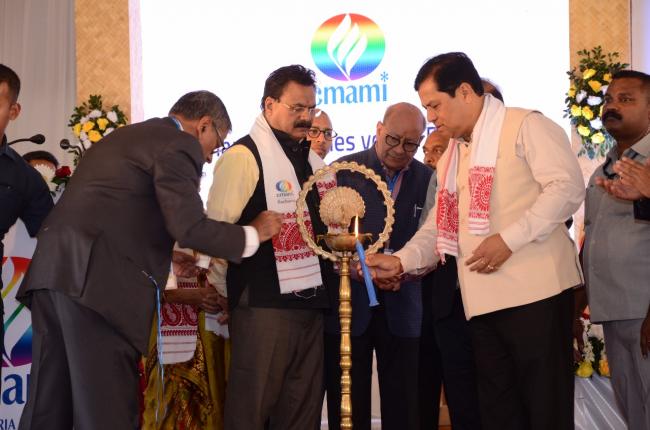 The new plant has been set up with a total cost of Rs 300 crore has a cluster facilities of cosmetic, ayurvedic and healthcare products.

Assam Chief Minister Sarbananda Sonowal said: "We want to convey to all potential investors that Assam is now ready for big industrial push and the state government is committed to facilitate major industrial players, from within the country and outside, in all possible ways for setting up their businesses here."

"Global Investment Meet to be held in the state in February would showcase Assam’s potential to become the business hub of South East Asia," Sonowal said.

Lauding the business practices of Emami which has given employment mostly to people from local communities in their factories, the Assam CM invited Emami to the Global Investment Meet for sharing their success story of establishing a thriving business in the state so that other business players are inspired to set up bases here.

"Emami is an example of how hardwork and sincerity can help one achieve success in life and they have shown how taking the community along through employment and other means would generate goodwill among the people for the business houses," Sonowal said.
The new unit, would fulfil 60 percent of the company’s total production requirement in the country.
Commerce and Industry Minister Chandra Mohan Patowary said there is an 800 million strong consumer market in South East Asia and investors must come forward to take advantage of Assam’s geographical proximity with SE Asian countries by setting up their businesses here.

He also said that the state government has already shown its earnestness in speeding up industrial development in the state by setting up Act East Policy Affairs Department which would fast-track the connectivity with SE Asia.

Saying that Assam is in fourth place in Ease of Doing Business index in the country, Patowary also informed about the state government’s plan to make business corridor till Tihu in Nalbari district and Brahmaputra dredging would boost water navigation in the state.

He invited the investors to take advantage of this connectivity and infrastructure boom in the state and expand their businesses into SE Asia market.
Finance Minister and Local MLA Himanta Biswa Sarma thanked Emami Limited for selecting Pacharia for setting up the plant which has brought employment opportunities to the local people.

He also urged the company to look beyond producing FMCG products in the state and bring in businesses from other diversified fields where they have expertise.

Joint Chairman of Emami Limited RS Agarwal and RS Goenka said that it is the largest production facility unit of Emami in the country with annual personal care and healthcare protection capacity of 1.1 lakh metric tons and will generate direct employment for around 1000 people.

The new unit has an installed manufacturing capacity of 49140 metric tons per annum.

RS Agarwal further said that, it is the first unit set up with 42 packing lines with production capacity of 3000 Ml units per annum.

In a statement, Emami Limited said that, it is the first manufacturing set up to have an automated PLC-based touch-less manufacturing facilities.

Apart from new unit at Pacharia, Emami Limited has seven others manufacturing units in the country and these are located at Amingaon and Abhayapuri in Assam, Pantnagar in Uttarakhand, Kolkata in West Bengal, Dongri in Maharashtra, Vapi in Gujarat and Masat in Dadar and Nagar Haveli.

Apart from it, Emami Limited has anoverseas unit in Bangladesh.