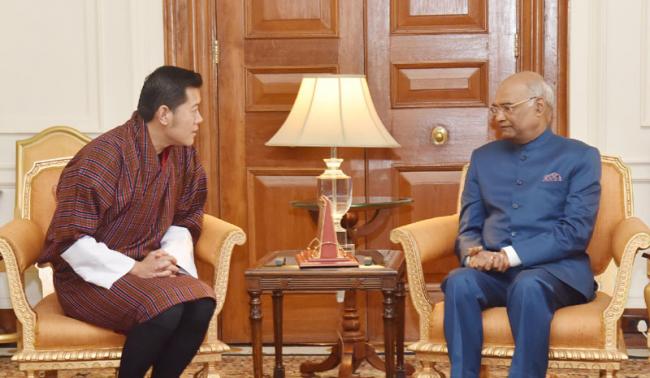 New Delhi, Nov 1 (IBNS): King of Bhutan Jigme Khesar Namgyel Wangchuck, along with the Queen and the Royal Prince called on the President of India, Ram Nath Kovind, at Rashtrapati Bhavan on Wednesday.

Welcoming the King and Queen to India, the President said that it is a privilege to welcome the King on the anniversary of his Coronation Day.

He also thanked them for bringing the Royal Prince on his maiden visit to India.

The President complimented the King of Bhutan on the successful completion of the first decade of his reign and his vision for a stable, happy and prosperous Bhutan.

He said that India is delighted to see the rapid progress made in Bhutan while simultaneously preserving its very special culture as well as protecting the environment.

"India has been happy to share its knowledge, experience and resources with Bhutan. Our development cooperation has been guided by the priorities set by the Government and people of Bhutan," the President said.

"Our relations are unique and special. Our bilateral ties are based on utmost trust and understanding. We should do everything to make it a model of bilateral cooperation, which will be noted by others in the neighbourhood," said President Kovind.

The President also pointed out that security concerns of India and Bhutan are indivisible and mutual.

He conveyed deep appreciation for the King of Bhutan’s personal involvement and guidance and the support provided by Bhutan in addressing the recent situation in the Doklam area.

He added that the manner in which both India and Bhutan stood together to address the situation in the Doklam area is a clear testimony to the friendship between the two countries.