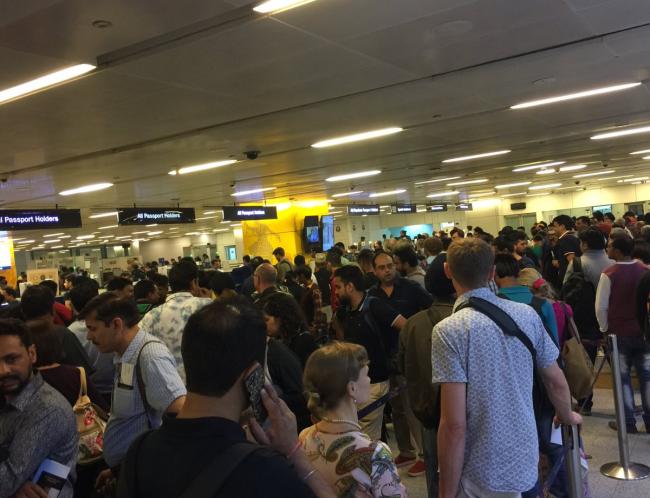 New Delhi, Nov 1 (IBNS): Home and civil aviation ministries have started to play the blame game as passengers are compelled to stand in the long queue at the Delhi's international airport due to delay in the immigration process.

The chaos at the airport came to light after Twitter user Parminder Singh have shared a couple of pictures on the micro-blogging site.

However, instead of any positive reply, the two ministries have started to fight verbally, accusing each other for the inconvenience of the passengers.

Officials from the home ministry said the queues could have been curtailed with the opening of more counters, according to NDTV.

"We had asked for space for more counters but this request was turned down for the capital's international airport" a senior official from home ministry was quoted by media.

But the civil aviation ministry has argued and dismissed the home ministry's claim. The aviation ministry said it is not possible to shorten the queue by opening more counters when they are not adequately staffed.

The aviation ministry also said that most of the staff members in the counters are not well trained to use technology since they are brought from Delhi Police and intelligence bureau, leading to the delay in the entire process at the airport.