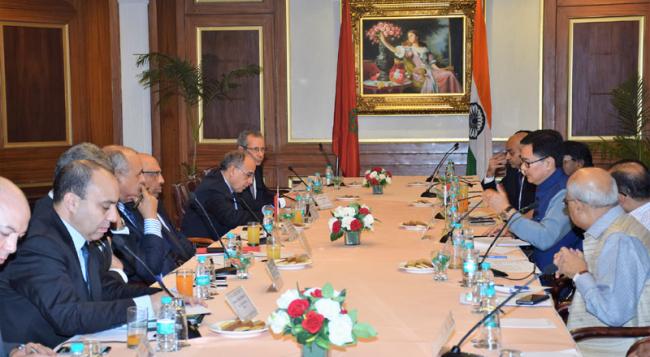 New Delhi, Oct 31 (IBNS): Noureddine Boutayeb, Minister of Interior of the Kingdom of Morocco is leading a composite delegation from various Ministries dealing with ICT and Socio-Economic Programmes and Morocco’s National Bank to India from 28th October to 6th November, 2017.

The delegation met with Kiren Rijiju, Minister of State for Home Affairs on Tuesday .

Boutayeb added that Morocco is emerging as a key counter-terror and de-radicalization partner in North Africa and they will like to share with India their experiences in this field. MoS for Home responded positively to the offer and added that India has also been a long sufferer of terrorism and Government of India was taking steps to counter this problem effectively. MoS Shri Rijiju welcomed the Moroccan offer.

Mr. Boutayeb during interactions expressed his happiness at the fact that a big democratic country like India with a population of over 1.3 billion, with its diverse cultures, languages could implement Aadhar in India in the shortest possible time. He went on to add that Morocco is also in the process of implementing programmes based on the socio-economic model of India and that his delegation’s primary focus was to learn from the experiences of India’s model of development and socio-economic reforms initiated by the Indian Government.

MoS for Home also briefed in detail the Moroccan Minister of various initiatives like the very recently introduced Crime, Criminal Tracking Network & Systems (CCTNS) a mission mode project under the National e-Governance Plan which will help modernize the Police Force and envisages national wide networking enabling share of information between Police Stations, State Officers and Security Agencies. He also briefed how this provides citizen interface to register complaints and to avail citizen services and covers all 35 States and UTs in India. Moroccan side expressed interest in details of this Project. MoS also requested the Moroccan side for liberal visa regime for Indian citizens for more people to people contacts between the two countries and also facilitate visas to business community on both sides. He also requested for expeditious conclusion of Mutual Legal Assistance Treaty. The Moroccan side requested for e-visa facility to Moroccan citizens.

Boutayeb expressed his happiness on his visit to a great country like India and thanked MoS Shri Kiren Rijiju for the positive exchanges both sides had today.