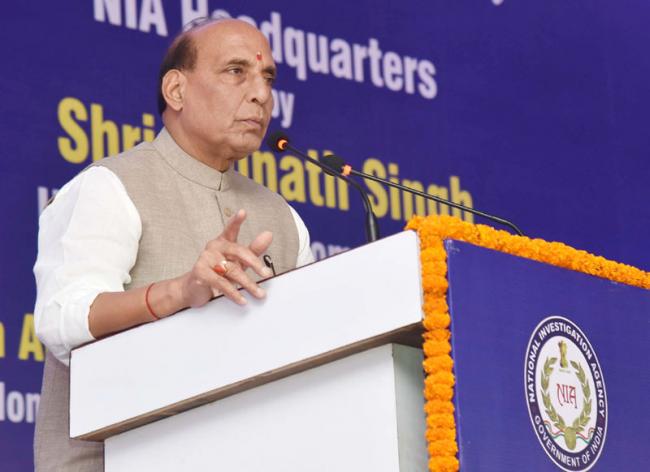 Inaugurating the new Headquarters Office Complex of the NIA here on Tuesday, Rajnath Singh said the NIA is on course to check the threat posed by terrorism.

The Union Home Minister said the NIA recently launched a crackdown on terrorism funding in the Kashmir Valley sponsored from a hostile neighbouring country and their accomplices in third countries abroad.

He commended the NIA, other Security Agencies, the Army, CAPFs and ATS of State Police Forces for coordinated efforts resulting in the elimination of a good number of terrorists.

Rajnath Singh said the Government initiated steps to grant full autonomy to the NIA in investigations.

"Earlier the NIA sought the MHA’s nod to proceed for action, but I’ve directed that there is no need for MHA’s approval and NIA is free to act discretely," Singh said.

Even the next Director General of NIA has been appointed almost two months in advance that would facilitate a smooth transition, he added.

Stating that terrorism is a curse to civil society and a roadblock to development efforts in democracies the world over, the Union Home Minister said the Prime Minister Shri Narendra Modi has brought the global community onboard in the fight against international terrorism.

The Union Home Minister said the NIA in just over eight years since its inception has gained the confidence and trust of the common man by conducting fair, credible and professional investigations into few of the most audacious terrorist attacks.

Rajnath Singh said the NIA investigations have resulted into 95% conviction rate. I am confident that NIA will maintain its credibility and professionalism, he added.

Speaking on the occasion, Director General, NIA,  Sharad Kumar said the NIA will soon inaugurate its new regional office buildings in Guwahati in December, 2017 and Hyderabad in June, 2018.

Ministers of State for Home Affairs, Hansraj Gangaram Ahir and Shri Kiren Rijiju, Heads of CAPFs and Senior Officers of MHA were also present at the inauguration ceremony.