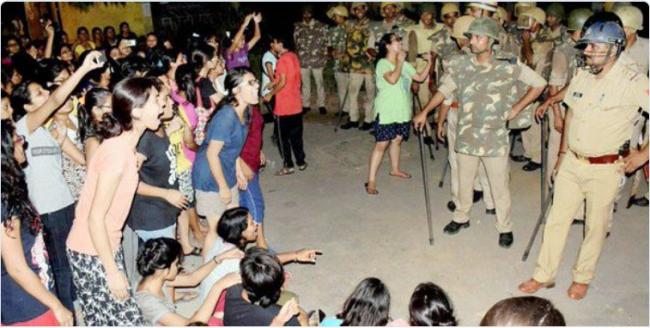 At least seven people, including women and journalists, have sustained injuries in a lathicharge.

The dissenters were protesting an alleged sexual harassment, which turned violent, forcing the police to resort to using their batons.

Meanwhile, following the skirmishes, campus authorities have advanced the puja holidays from Sept 28 to Sept 25.

It's better to b cow in Bhu than being a girl cz they r more safe
Male PAC FORCE doing this to girls#bhu_molestation #BHUProtest #UnSafeBHU pic.twitter.com/9OigWBb2gt

The protests started on the night of Sept 21, when students of a girl's hostel sat in protest following the sexual harassment of a student of visual arts near Bharat Kala Bhawan, a Times of India report read.

The girl alleged that she was assaulted by three bike riders and added that the campus security guard, who was standing within 100 metres, didn't react.

All this took place while the Prime Minister was in the state.

In its statement, the BHU said that the protests were politically motivated, to malign the image of the university during Prime Minister Narendra Modi's visit.

The ongoing incident has forced state Chief Minister Yogi Adityanath to intervene, who has asked for a detailed report.