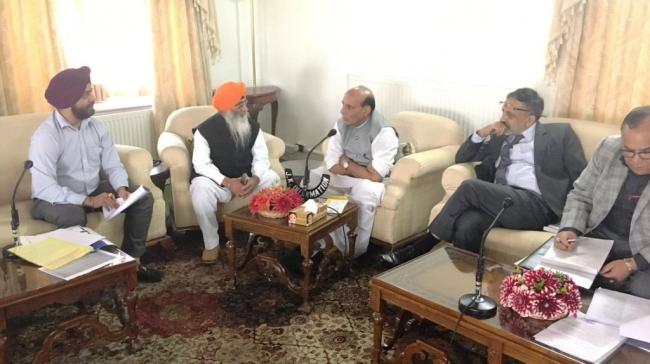 He was received at the airport by the state’s Deputy Chief Minister Nirmal Kumar Singh, senior minister Abdul Rehman Veeri and Senior Officials of the State Government.

“I am going there with an open mind and I am willing to meet anyone who will help us in finding solutions to problems facing J&K,” said  Rajnath Singh in a tweet before leaving for Srinagar.

Soon after his arrival the Union Home Minister had an hour long one-to-one meeting the Chief Minister Mehbooba Mufti.

The Union Home Minister asked the authorities to expedite the implementation of the PMDP in a time bound manner.

Rajnath Singh said it will create jobs for the people of J&K.

The PMDP, a Rs.80,068 crore package announced by the Prime Minister Shri Narendra Modi on November 7, 2015, covers 63 projects pertaining to 15 Ministries of the Government of India.

The Union Government has already sanctioned Rs.63,000 crores for the various projects, which amounts to 78 percent of the total cost of the PMDP package. An amount of nearly Rs.22,000 crore has been released.

Nearly two years after the PMDP-2015 was announced, five of the 63 projects have been completed. These include the prestigious Chenani-Nashri tunnel costing Rs.781 crore, announcement of remuneration to Special Police Officers (SPOs) from Rs.3,000 per month to upto Rs.6,000 per month as well as assistance provided for Pucca and Kuchcha houses damaged during the 2014 flood.

The land acquisition in respect of semi-Ring Roads in Jammu and Srinagar will be completed within two months.

The four-laning of Jammu-Udhampur section of National Highway, NH-1A, is nearing completion. Nineteen road connectivity projects costing about Rs.43, 000 crore are under implementation in the State, which are progressing satisfactorily.

An investment of about Rs.5,810 crore under Power Sector is being made to improve the transmission and distribution network in the state. Besides, the Central Government is supporting the State with an investment of Rs.3,790 crore on Pakaldul hydroelectric project.

For the construction of AIIMS at Awantipora and Jammu, Rs.2,000 crore each are being made available and an amount of nearly Rs.91 crore has been released. Besides, IIT, Jammu and IIM, Jammu have already started functioning from temporary campus and the setting up of permanent campus is under progress. Similarly under the Health Sector, Rs.900 crore is available for completion of ongoing health infrastructure. Rs.200 crore has been utilized.

The work on the comprehensive management of Jhelum was reviewed and found satisfactory. The DPR for Phase-II is being prepared.

The rehabilitation plan for migrants of Jammu, PoK and Kashmiri Pandits was also reviewed. It was noted with satisfaction that the projects are progressing satisfactorily.

During the meeting, other developmental projects under Urban Development, Solar Energy, Horticulture, Tourism etc were also reviewed. The Chief Minister assured the State Government’s full support in the implementation of the PMDP and on all other fronts.

Later, as many as 24 delegations of various organizations, including social, trade, travel and business from across Kashmir Valley called on Rajnath Singh.

The delegations apprised the Union Home Minister about the varied problems relating to their respective organizations and submitted memorandum and requested for their resolution of issues on priority.