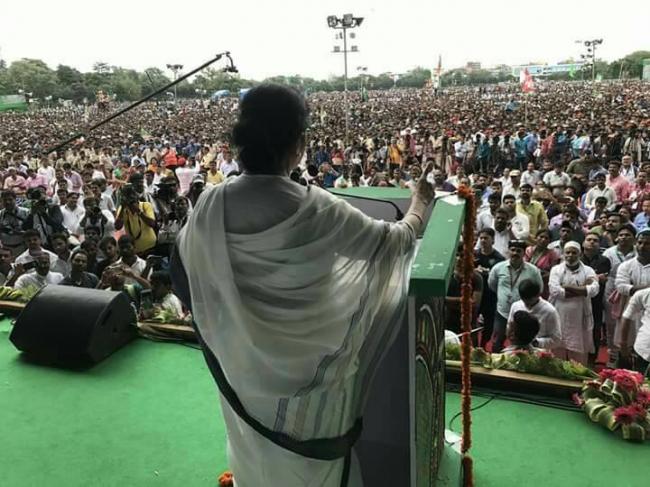 "Three years have passed. Where is ‘achhe din’? ," Banerjee said while addressing at the massive rally organised by RJD chief Lalu Prasad Yadav in Patna on Sunday.

"Unemployment has risen, women are not safe, and farmers are dying. Minorities, Dalits and weaker sections are under threat," she said.

She said: "They only made false promises."

Banerjee said people will remove the BJP government at the Centre from power over the issue of note ban.

She said people are tortured in the name of GST.

"We are not afraid. We are ready to fight. We cannot be intimidated. Fight us if you can. We will give our lives but never compromise with principles. People will vote the current Govt out over ‘notebandi’," she said attacking the Centre.

She even mentioned the violence which Haryana saw on Friday following the conviction of Dera Sacha Sauda chief Gurmeet Ram Rahim Singh in a rape case.

More than 30 people were killed as violence hit the state following the conviction.

Banerjee attacked the BJP-led government in the state over the issue and said: "RSS and BJP want to trigger riots for political benefits. They could not handle the situation at Panchkula. Army is immediately deployed for BJP-ruled States. But non-BJP States do not get any help."

Rebel JD(U) leader Sharad Yadav on Sunday said a grand alliance will be formed at the national level to take on the BJP at the next Lok Sabha elections.