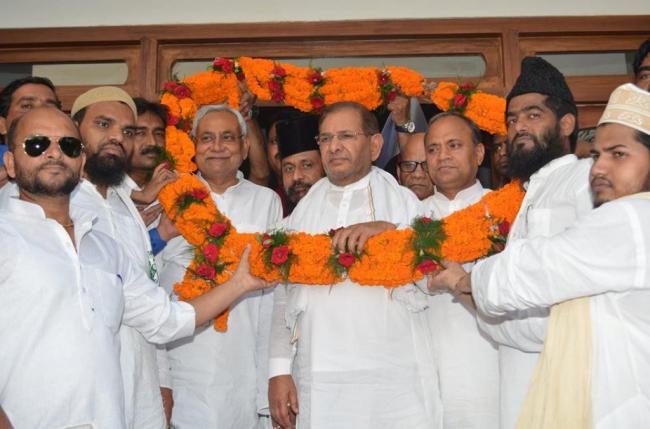 Is JD(U) heading for a split?

India Blooms News Service | | 19 Aug 2017, 11:31 am
#NitishKumar, #SharadYadav, #JDU, #NarendraModi, #NDA
Patna, Aug 19 (IBNS): Ever since Janata Dal (United) co-founder and Bihar Chief Minister Nitish Kumar severed all ties with the 'mahagathbandhan' (the Congress-JD(U)-RJD coalition) grapevine had it that the former's own party is heading for a split and with parallel meeting called by both Kumar and Sharad Yadav in Patna on Saturday, the rumours have slowly started to take shape into reality.

Yadav is Nitish Kumar's long-time aide and co founder of the JD(U), albeit the less popular one.

Kumar has called for a national executive committee meeting of the JD(U) at his official residence, where he and his supporters are likely to join the NDA formally.

Yadav, who detests the move, has called for a separate meeting, Jan Adalat, at S K Memorial Hall.

Even though the in-house battle is evident,  JD(U) principal secretary general K C Tyagi has maintained that no such development has taken place and that Yadav has left voluntarily.

"The national executive meeting at the One Anne Marg residence of the chief minister is the party's official programme," Tyagi was quoted as saying in the media.

The inclusion is held as Kumar's homecoming as he was earlier affiliated with the NDA and left it after the BJP went ahead and declared Nerendra Modi as the Prime Ministerial candidate for the 2014 general elections.

Riding on the Modi wave, the BJP swept the polls later.

However, Kumar managed to level the competition after the Narendra Modi-Amit Shah led BJP failed to capture Bihar a year later.

The grand alliance won it comfortably with Lalu Prasad Yadav's RJD emerging as the highest gainer.

However, Nitish Kumar was sworn in as the Chief Minister, while Lalu's son Tejaswi Yadav joined the cabinet as Kumar's deputy.

The exclusion of the latter a month ago created the rift, resulting in Kumar changing alliance and joining the BJP-led NDA.

Kumar, who is known to be a critic of Prime Minister Narendra Modi, has however praised him in recent times, calling him a true leader.

He has also predicted that it will be impossible for the opposition to take down Modi in the upcoming 2019 general elections.