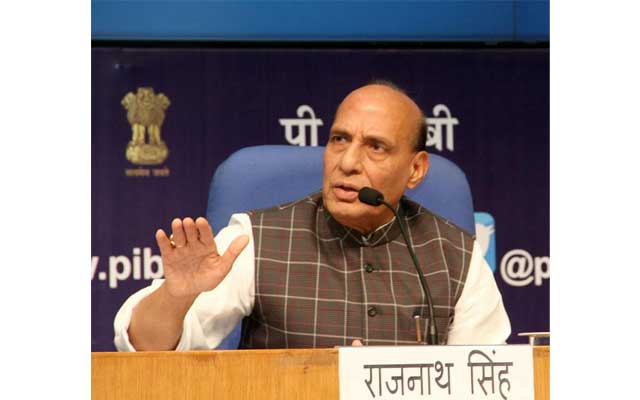 During the meeting, the Home Minister said that the multipronged strategy comprising of security, development, ensuring rights and entitlements of local communities should be vigorously pursued.

Rajnath Singh reiterated the concept of ‘SAMADHAN’ given as new doctrine by him for use in security operations during the meeting of LWE affected states on May 8, 2017.

The elements of this strategy are S for Smart Leadership, A for Aggressive Strategy, M for Motivation and Training, A for Actionable Intelligence, D for Dashboard-based Key Result Areas and Key Performance Indicators, H for Harnessing Technology,  A for Action Plan for Each Theatre and N for No access to Financing, read a government statement.

During the meeting different development projects including Road Requirement Plan, air connectivity, power, education, health and banking sectors were reviewed.  Under RRP-1, 4433 km roads have been constructed which include 1504 km road constructed during the last three years in the most difficult areas.

The Home Minister asked to expedite the remaining roads at the earliest.

While reviewing the progress of road connectivity under RRP-II, Shri Rajnath Singh expressed his concern over delay in submission of Detailed Project Reports (DPRs) by the State Govts.

Regarding air connectivity, it was mentioned that the Jagdalpur airport will be operationalised shortly under Regional Connectivity Scheme.

It was also pointed out that there is a plan to connect Jeypore airstrip in Odisha under this Scheme.

Eight solar parks are also planned for LWE affected areas for which land acquisition is under progress.  During the meeting, it was also informed that significant improvement has been made in filling up the vacancies in the security forces.

The opening of new bank branches and ATMs in 35 most LWE affected districts was also reviewed.

The Home Minister mentioned that all the ongoing development projects should be taken up with the concerned central Ministries and the State Govts. and it should be ensured that these are completed in a time bound manner.

The meeting was attended by the MoS (Home) Shri Hansraj Gangaram Ahir, OSD (MHA) Rajiv Gauba and senior officers from the Ministry of Home Affairs and the CAPFs.