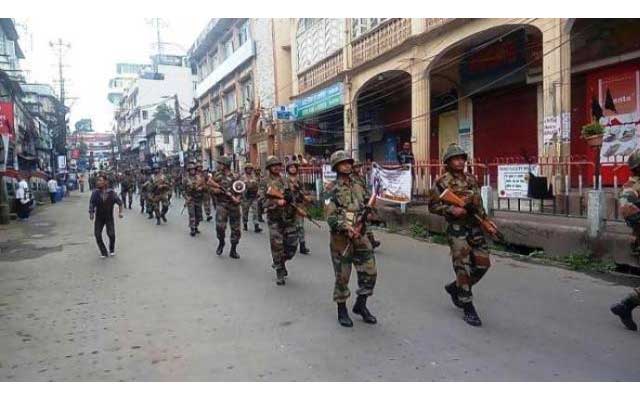 Following the violence, two columns of Indian Army have been deployed in Darjeeling, Kurseong and Sonada to assist local police in restoring peace.

Alleging that a supporter of Gorkha National Liberation Front (GNLF) was shot dead by police, supporters of GNLF and Gorkha Janmukti Morcha (GJM) went on a rampage and clashed with the police on Saturday morning, reports said.

According to reports, a young supporter of GNLF, Tashi Bhutia, was shot at when police allegedly opened fire on protesters at Sonada area at around 11 pm, on Friday.

Sustaining bullet wounds, Tashi Bhutia was rushed to a local hospital where he was pronounced dead.

Hours after the incident took place, a large number of GNLF and GJM supporters took out protest rally with the killed youth's body from Sonada to Darjeeling on Saturday morning.

When agitators torched a traffic police booth and attacked Sonada Police Station, policemen restored to lathicharge and lobbed tear gas shells to disperse the protesters and bring the situation under control.

"As indefinite shut down is underway in Darjeeling hills, strike supporters stopped a Darjeeling-bound vehicle at Sonada and police intervened the matter," a mouthpiece of GNLF told IBNS. "When protesters threw stones at the security personnel, police opened fire on protesters and our activists Tashi Bhutia, who went there to buy medicines, was shot dead."

A heavy police force along with paramilitary forces and Indian Army personnel have been deployed in the area to bring the situation under control. Till the latest update came in, situation at Sonada and its adjoining areas remained tense on the 24th day of GJM's indefinite general strike.

Local police, however, claimed that no bullet was fired from their side on Saturday and they don't have any idea about the death of the GNLF supporter.

Meanwhile, Chief Minister Mamata Banerjee alleged that clashes in Darjeeling had been triggered in a planned way to hurt peace in Bengal.

"Clashes in Darjeeling are being provoked by foreign countries in a planned way," Mamata Banerjee said. "Centre is not cooperating with us in restoring peace in Darjeeling, they should have deployed more paramilitary forces to the hills."