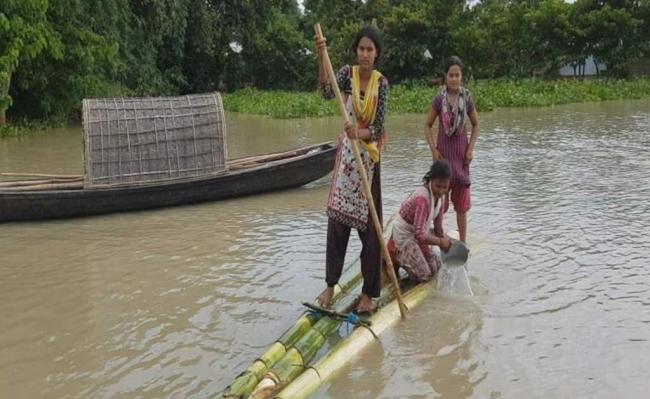 
The current spate of flood inducted 32,148 hactares agricultural land in Assam and claimed 24 lives so far.

According to the reports of Assam State Disaster Management Authority (ASDMA), over 4.25 lakh people of 17 districts are affected in the current flood.

On Friday, three more persons including a minor girl lost their lives after they drowning in flood waters in Nalbari, Karimganj and South Salmara district and the death toll rose to 24.

On the other hand, Assam forest department has introduced Time Report Card at National Highway 37 in Kaziranga National Park to control speed of all type of vehicles for protecting wild animals following flood waters submerged over 75 per cent areas of the park.

“Most of wild animals have taken shelter in nearby Karbi Anglong hills area by crossing the highway following the critical flood situation. In view of the current spate of flood in Kaziranga, we have introduced Time Report Card at night to control speed of the vehicles,” Assam forest minister Pramila Rani Brahma said.

Sonowal directed this while reviewing state flood situation in a meeting held at Brahmaputra State Guest House in Guwahati which was attended by several ministers of his cabinet.

The Assam CM directed the ministers to assess the damage caused by flood & erosion and also to interact with the affected and take stock of their needs and grievances.

Sonowal further referred to the difficulties faced by people due to potholes on roads and directed the PWD Minister to complete repairing of all roads of the state within the month of July, 2017.

Keeping in view the damages caused by erosion during flood, the Chief Minister directed the Water Resources Minister to take necessary steps including ensuring availability of anti-erosion materials for prompt action at affected sites.

He also directed the WR Minister to take measures for procurement of dredger for excavation of river bed apart from preparing plan for anti-erosion adopting latest technology.