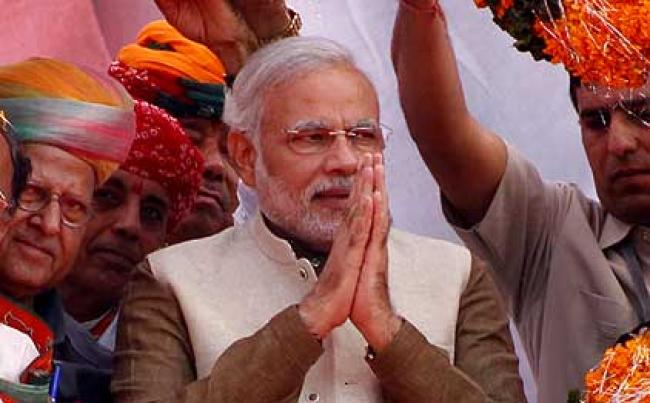 India Blooms News Service | | 31 Mar 2014, 11:56 pm
#
Guwahati, Mar 31 (IBNS): Highlighting how the Congressâ€™ divisive politics had ruined Assam and the nation, Bharatiya Janata Party (BJP) 's prime ministerial candidate Narendra Modi, in his rallies at Gogamukh, Biswanath Chariali and Sivasagar in Assam on Monday urged the people to forget those who had forgotten the state as well as India and instead support the country's main opposition party for a better future.

Speaking on the Congress’ insensitive approach towards the well-being of its people, Modi spoke of how the Congress leaders did not bother to visit and console the families of those killed in a recent incident in an area near Biswanath Chariali. He also questioned the Congress over their failure in addressing the grave issues of national importance like price rise and unemployment, as also their inability in tapping the vast natural resources of a land like Assam. Rejecting the claims made by political pundits, who were busy predicting poll results, as hogwash, Modi stated that the 2014 Elections were more about the BJP’s chemistry rather than the arithmetical conclusions of the political analysts.  Modi also recalled his visit to Assam as an organizational worker and spoke of how he had never seen such a huge crowd gather to listen to a politician.  <span style="\\&quot;font-family:" arial,="" sans-serif;="" font-size:="" 13px;\\"="">Terming the large crowd as a ‘kesariya samundar’, he acknowledged the support shown by the people and claimed to repay back their confidence by ensuring the progress of the nation.