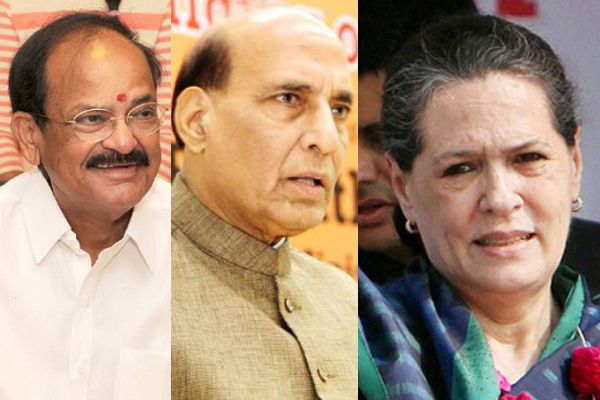 The two senior ministers are part of the three-member team, constituted by BJP chief Amit Shah, to hold parleys with political parties on the issue.


The move by the BJP to hold discussions with one and all is being seen as  a strategy to get approved the name of its choice by the opposition- a democratic approach that would leave the Government unscathed from being accused of going unilateral.

If the Government fails to strike any consensus it is at liberty to go ahead with the superior strength that it has in Parliament and state Assemblies.

The opposition parties, on the other hand, have held meetings among themselves to decide upon a name of their choice to take on the NDA candidate.

They are reportedly waiting for the NDA to make public its nominee before announcing theirs.

Though the opposition lacks the required number to prevail over the ruling coalition, its intention is to throw a political challenge.


Last month, the opposition parties had met at a lunch hosted by Sonia  Gandhi to take a decision on a candidate acceptable to all the attending parties.

The names of former Governor Gopal Krishna Gandhi, former Lok Sabha Speaker Meira Kumar and Nationalist Congress Party chief Sharad Pawar are said to be on the wishlist of the opposition.

However, Bengal Chief Minister Mamata Banerjee, who attended the lunch but had also met PM Modi the day before, had suggested that the Government and the opposition could find a consensus candidate.

As for the NDA, speculations are doing round that External Affairs Minister Sushma Swaraj, who has a massive fan following, could be the choice as the next incumbent of the Rashpati Bhavan.

Rumours are also rife about the candidate being drawn from dalit or tribal communities- a move, which may  have a disarming effect on the opposition.