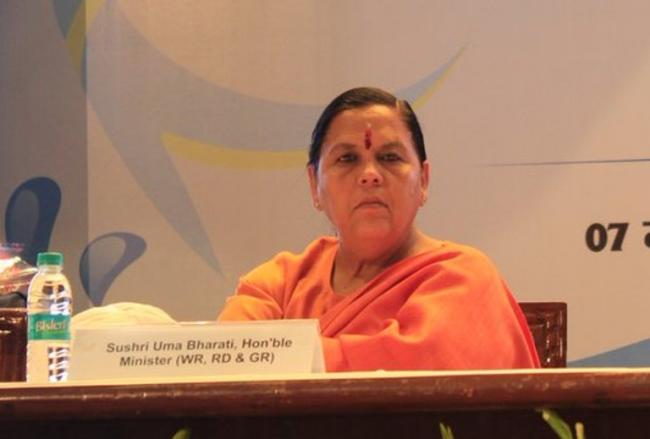 The Bihar lawmaker was armed with expert recommendation to consider decommissioning of Farakka Barrage as a possible alternative to address the sedimentation problem in river Ganga.

The said recommendation in the form of Delhi Declaration was made by water experts from reputed institutions such as IITs, National Institute of Hydrology, NEERI, at the conclusion of a two-day conference on “Sedimentation, A colossal impediment to incessant flow of river Ganga – Problems and Solutions”, organized by his ministry  in New Delhi on May 18-19, where the experts unanimously adopted the Delhi Declaration.

Bihar CM Nitish Kumar was present at the Conference on May 18.

“Before making such a sweeping statement Uma ji did not even bother to consult the Bihar government on the contentious issue,” Singh said.

Uma Bharti in a recent interview to The Hindu newspaper, had reportedly stated “Farakka Barrage is not the problem … I have had experts look at it…Once the waterway on the Ganga begins, developers will dredge the silt and (Transport Minister) Nitin Gadkari will find creative ways to use that, too.”

ii) water ways were not removing silt and that dredging silt would not work as silt will come back.

The experts were unanimously of the view that “Dredging of National Waterways-1 is increasing erosion in Bihar. The project should be put on hold until a scientific study of impact of dredging on erosion is done”.

The consensus was that without the incessant flow of Ganga, it was not possible to make the river clean and therefore, instead of ‘keeping the silt away’; the strategy of ‘giving the silt its way’ should be adopted.

Attacking Bharti, Singh said since the National Inland Waterway on Ganga  would require construction of several more barrages on the river, “that would not just disturb its incessant flow, but would also convert the river into several small ponds”.