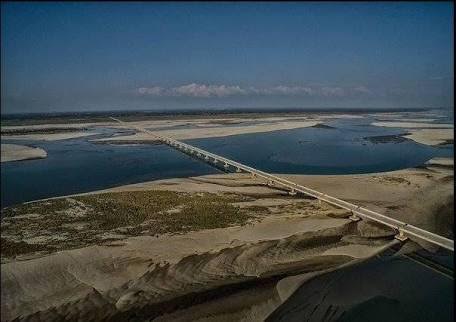 India Blooms News Service | | 18 May 2017, 03:53 pm
#PM Modi, # Assam, # Arunachal Pradesh
Guwahati, May 18 (IBNS) : Prime Minister Narendra Modi will inaugurate India's longest bridge connecting Assam and Arunachal Pradesh on May 26, the day he kick starts the celebrations for completion of three years of the NDA Government at the Centre.

The bridge is  situated around 100 kms from the McMahon line separating India and China.

Built on the Brahmaputra river and known as the Dhola-Sadiya bridge, it will help reduce the travel time between Assam and Arunachal Pradesh by over 4 hours.

According to the reports, the 9.15 km- long bridge has 60-tonne capacity. It will help in the development of both the states.

While the people of both Assam and Arunachal Pradesh will  witness the inaugurating the bridge, many will remember former Assam minister and present BJP leader Jagdish Bhuyan, who representing the Sadiya assembly constituency, first put forth the pryoposal for the bridge.

"It is my dream project. I am so happy that this project is completed after 14 years. The people of Sadiya in Assam side and Anini in Arunachal Pradesh had faced lots of problems as they had to take a four- hour ferry ride to cross the Brahmaputra river," Jagdish Bhuyan said.

Bhuya said it was on May 29, 2003  that he and and former MP Dr Arun Kumar Sarma had submitted a memorandum to then Union minister of SSI and DONER CP Thakur for construction a bridge at Sadiya over the Brahmaputra.

"We also had a discussion with then Arunachal Pradesh Chief Minister Mukut Mithi regarding the proposal  and Mithi  sent a letter to the Prime Minister on June 24, 2003. In the same year, we  submitted another memorandum to the then Union Minister for Road Transport and Highways Maj Gen. BC Khanduri on July 7,"  Bhuyan said.

"After taking the initiative to construct a new bridge over Brahmaputra river to connect Sadiya, we  submitted another memorandum to CP Thakur on July 10, 2003.  The matter was discussed in the DONER ministry meeting in 2007 and finally it was approved," he said.

The construnction of the bridge started in 2011 at a cost of Rs 950 crore.

As there is no civilian airport in Arunachal Pradesh, the Dhola-Sadiya bridge will help the civilians of the bordering state with China to access better road connectivity.