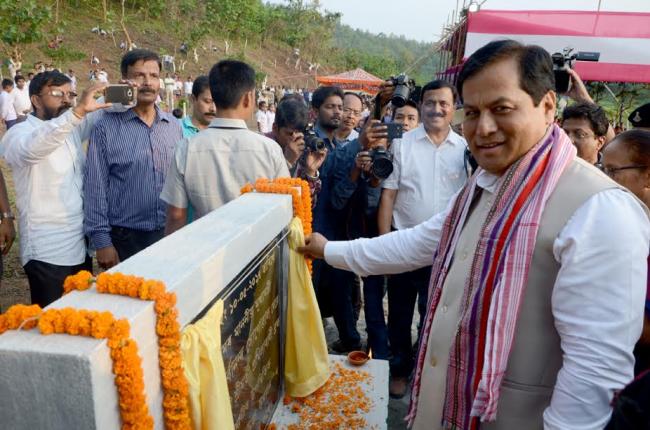 India Blooms News Service | | 10 May 2017, 09:45 pm
#AssamForest, #Plant2CroreSaplings, #Sonowal, #PollutionFreeAssam, #PramilaRaniBrahma, #Guwahati
Guwahati, May 10 (IBNS): To protect environment, nature and to make a pollution free Assam, the state government has planned to plant around 2 crore saplings across the state in this year.

While laid the foundation stone of Chief Minister’s Seuj Uddyan Achoni at Mikirpara area under Rani Reserve forest, outskirts of Guwahati on Wednesday, Assam CM Sarbananda Sonowal said that Assam in known for its rich bio-diversity throughout the world.

Sonowal called for joint action by the state forest department and public to increase the green cover of Assam and to make pollution free Assam a reality.

“If we have to keep the glory continue, everybody would have to contribute in the conservation of nature,” Sonowal said.

Stating that forest officials have a great responsibility in protection forest and its bio-diversity, the Assam CM advocated a concerted effort to awaken people on their role.

The Assam CM directed the forest officials to carry out frequent interaction with students and teachers across all the educational institutions of the state.

Sonowal also raised concern over rising number of incidents man-animal conflict and blamed the human being for the situation.

The project to be implemented with an expenditure of Rs. 3.65 Crore is considered to be a beginning in achieving the Chief Minister’s coveted goal of an Assam free from pollution.

The Assam CM distributed appointment letter to the 44 newly recruited Forest Rangers in that programme and urged them to perform their duties with sincerity and utmost dedication.

Sonowal also directed the forest department to honour those officials who render exemplary service in the field of conservation of nature.

Underlining that the state government is resolutely working to transform Assam and to bring in positive change in the thought, option and behavior of the people of Assam, the state CM called for active support from all sections of the society to make Assam a model state in terms of conservation of nature in next 10 years.

On the other hand, State Forest and Environment Minister Pramila Rani Brahma said that, the state forest department has taken adequate measures to protect environment of the state.

“We have taken stern action against those who violates the laws and hurting our forest and environment,” Brahma said.