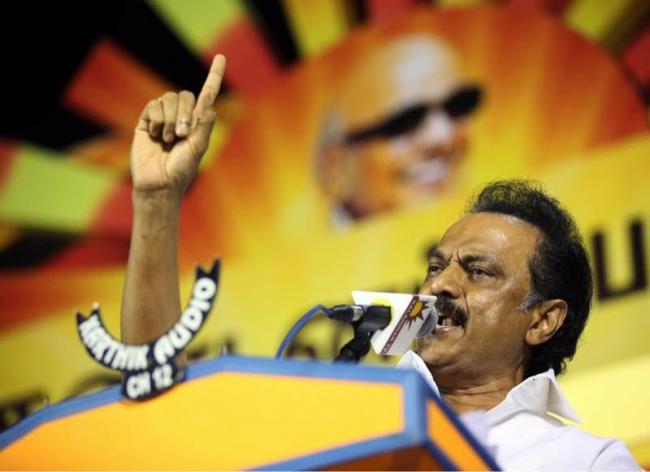 India Blooms News Service | | 22 Apr 2017, 10:23 pm
#MK Stalin, # lashes out at centre, # Hindi imposition, # anti-Hindi agitation, # Tamil Nadu.
Chennai, Apr 22 (IBNS): After the protest over the writing of Hindi letters in the milestones of the national highway in Tamil Nadu, DMK leader M K Stalin lashed out at the centre for imposing Hindi in every aspects of the country and made scathing attacks on the Prime Minister of India Narendra Modi, on Saturday, media reports.


Stalin unsparingly attacked Modi for the imposition of Hindi language through different ways in the country, ever since he has ascended to the post of the Prime Minster.

Making the PM responsible for such an imposition, the DMK leader said that such attempts would "decimate" the unity of the nation.

He even said that the delivery of speeches by all union minsters in Hindi as well as the decision to make the study of this language compulsory in all the Central Board of  Secondary Education (CBSE) affiliated schools are reflections of such an attempt by the centre.

Few days back, the central government made it mandatory for all CBSE affiliated schools to keep Hindi subject in the course.

Stalin was seen earlier to raise his voice on this issue, particularly when he had protested against the writing on milestones along the national highways of the state in Hindi language.

The DMK chief even said that the centre is trying to make Hindi as an official language of the country and also made the central government cautious about the anti-Hindi agitation that might erupt in this Southern state.