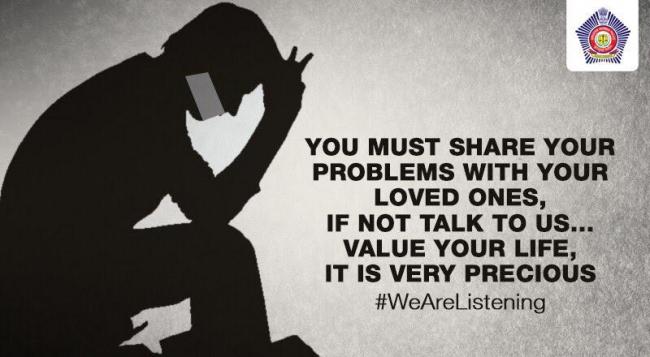 India Blooms News Service | | 04 Apr 2017, 03:09 pm
#Mumbai, #StudentSuicide, #Depression, #MumbaiPolice, #WeAreListening, #WHO, #DepressionLet'sTalk
Mumbai, Apr 4 (IBNS): Mumbai Police, on Tuesday, urged people to speak to them if they cannot approach any one elese when depressed rather than end their lives, keeping in view the alleged suicide of a student in Mumbai the day before.

"Always better to speak up than give up #WeAreListening," wrote Mumbai Police on its official page.

On Monday, the Mumbai Police had tweeted, "Deeply bereaved with suicide of a young boy in the city. We urge the youngsters to reach out to us #WeAreListening."

According to media reports, a college student allegedly jumped off from a suite of Taj Lands End in Mumbai's Bandra West on Monday after going live on Facebook with a 'tutorial' on committing suicide.

Before allegedly jumping off from a window of a 19th floor suite, Arjun Bhardwaj, 24, had posted a live video, which reportedly ended with the words, "see you guys on the other side."

According to the latest estimates from WHO, more than 300 million people are now living with depression, an increase of more than 18 per cent between 2005 and 2015.

The new estimates have been released in the lead-up to World Health Day on April 7, the high point in WHO’s year-long campaign “Depression: let’s talk”.