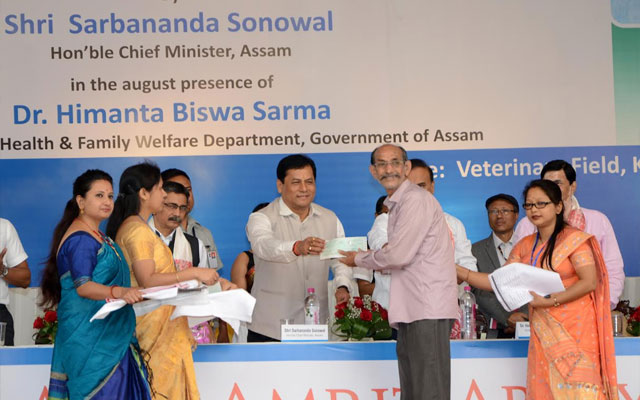 India Blooms News Service | | 25 Mar 2017, 08:05 pm
#Assam, #AssamChiefMinister, #SarbanandaSonowal
Guwahati, Mar 25 (IBNS) : Assam Chief Minister Sarbananda Sonowal on Saturday launched the ceremonial distribution of cheques to the beneficiaries of Atal Amrit Abhiyan when he handed over a cheque worth Rs 2 lakh to Saurav Jyoti Kalita a patient with neurological disorder at a programme held at Veterinary Field, Khanapara in Guwahati.

Atal Amrit Ahiyan is a unique health assurance scheme launched by the Government of Assam for the benefit of economically poor people of the State. It may be noted that under the scheme, cheques worth Rs 22,50,0000 have been distributed today among 3236 number of patients suffering from cancer, cardio vascular disease, kidney disorder, neurological conditions, burn injuries and neo-natal complications after the scheme was launched on Dec 25, 2016. 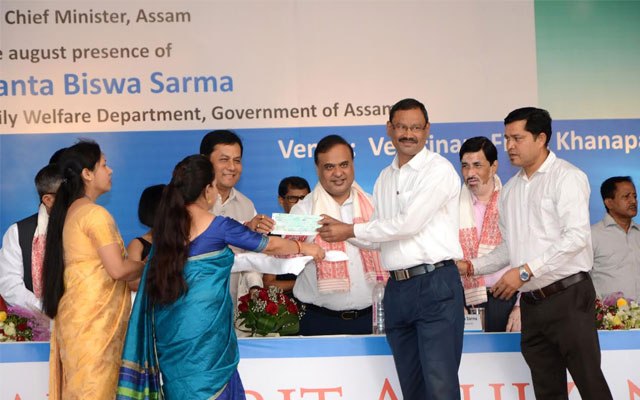 Speaking on the occasion, Chief Minister Sonowal urged upon the people of the state to contribute to build Assam on constructive values by giving a chance to positive thoughts over the negative ones. Casting a glance over the years that have gone by, Sonowal said that the new BJP led dispensation in Assam  is committed to build a new and developed Assam based on the edifice of positive values. I therefore, urge upon all sections of the people to give up negative attitudes and lend your hands to augur a positive and constructive ambience to bolster the growth of Assam.

Terming the distribution of cheques to the patients as a significant day in the history of Assam, Sonowal said that our endeavour is to give quality treatment and through Atal-Amrit Abhiyan we will continue to reaching out to those suffering people who really need our help. 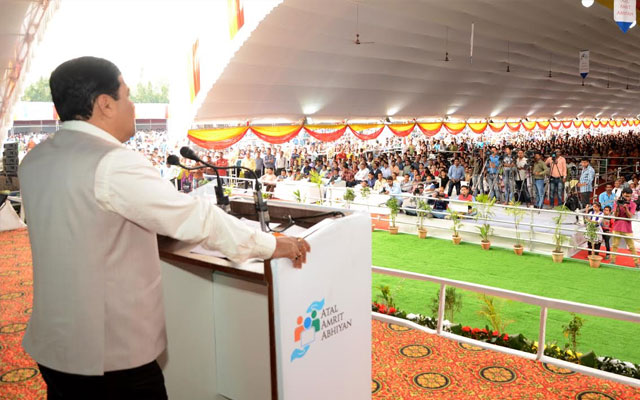 He also informed that a quality maintenance legacy has been chalked out to successfully carry forward the Atal Amrit Abhiyan to ensure an enduring smile to the people.

The Assam CM also said that since taking over power his government has been working to ensure equal development, equal dignity and equal opportunity to all sections of the people of the State by giving a boost to centre’s Sabka Saath Sabka Bikas.

He also requested the people to keep a strict vigil on the government and keep a track on its performances so that the government can keep working for the development of all people belonging to Barak Brahmaputra, hills and plains. 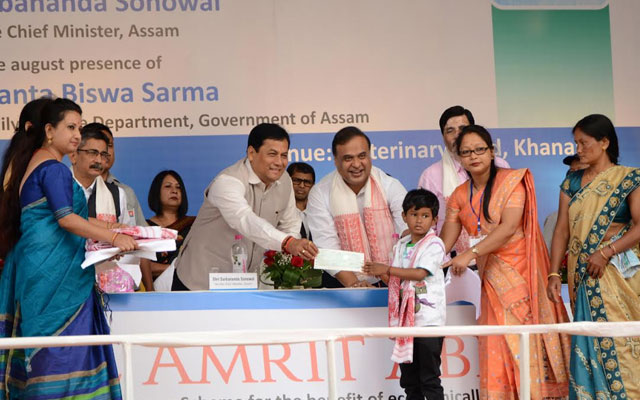 Sonowal also said that the government is organising Namami Brahmaputra to showcase the indigenous culture, tradition and customs of the enumerable people living on both sides of the Brahmaputra which is our culture, civilization, economy and life-line.

Health and Family Welfare Minister Dr Himanta biswa Sarma while speaking on the occasion said that the government has fulfilled its pre-poll promises by launching the Atal Amrit Abhiyan and made the health care facilities accessible, affordable to all.

He also said that under the scheme every family whose yearly income falls below Rs 5 lakh will get smart card containing the names of each member of the family.

He also said that from the beginning of April, special team will visit every village to take photograph of the beneficiaries for issuing cards to them.

The Assam Health minister said that smart cards will be given to the beneficiaries from October 2, 2017 coinciding with the birth anniversary of Mahatma Gandhi.

He also said that under the scheme every individual member of a family is entitled to government cash assistance upto Rs 2 lakh per year.

MLAs Ramakanta Deuri, Angoorlata Deka, Media and Legal Advisors to Chief Minister Hrishikesh Goswami and Santanu Bharali and a host of other dignitaries were present on the occasion.