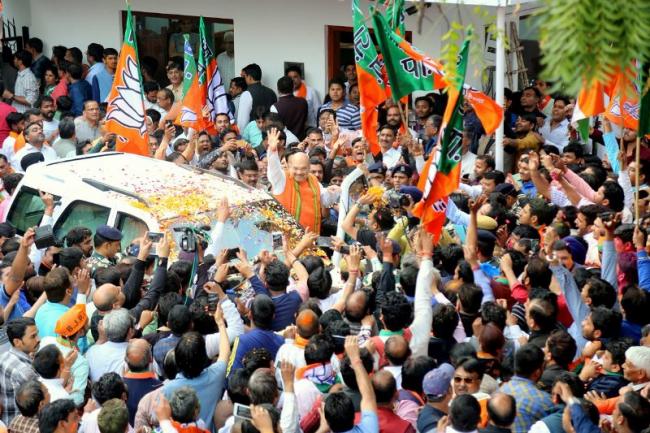 India will be free from casteism and appeasement from now onwards: Amit Shah

BJP has won comprehensively in Uttar Pradesh and Uttarakhand and is having a close fight in Manipur with Congress.

Shah has attributed the victories of these two states to Prime Minister Narendra Modi and party workers.

He even claimed their victory in UP and Uttarakhand to be greatest victory since Independence.

He said, "Results of all five states that went to polls will give a new direction to politics of India."

"This victory will end casteism, rule of a single family and appeasement. People will vote for politics of performance now," the BJP President added.

Uttar Pradesh is known for its caste politics.

Speaking about the reason behind his party's success in recent polls, Shah said, "Demonetisation, electricity in village, sanitation and various schemes earned support from people."

Shah added that double digit growth rate (GDP) would be impossible without the growth of the most populous state in India.

However, in Punjab, the BJP-Akali Dal had to settle for the third place as Congress took top stand.

Regarding the defeat in Punjab, Shah said that his party will introspect and analysed the result.

"We will introspect and analyse where we lagged behind," he said.

Though Goa is heading towards a hung assemble, Shah claimed that BJP would form its government there.

The party president also refrained from making a comment on Mayawati's allegation against BJP, where the BSP leader accused the Narendra Modi led party of tampering with voting machines.

"I can understand her state of mind," he said.

Amit Shah informed that the Prime Minister will be present in the BJP parliamentary meeting on Sunday, where the Chief Ministers of the winning states will be decided.