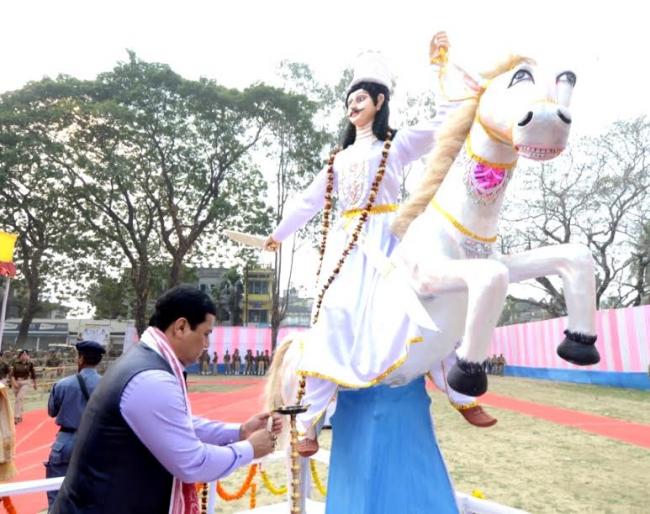 We must follow Bir Chilaraiâ€™s example of true patriotism and bravery: Assam CM

India Blooms News Service | | 10 Feb 2017, 08:19 pm
#Assam, #AssamChiefMinister, #Bir Chilarai
Guwahati, Feb 10 (IBNS) : Stating that Bir Chilaraiâ€™s example of patriotism and bravery must be followed by the young generation of the state, Assam Chief Minister Sarbananda Sonowal on Friday said that the government is taking many steps to immortalise the great General of the erstwhile Kamata Kingdom ruled by Koch Dynasty.

Taking part as the Chief Guest in the 507th Birth Anniversary celebration of Chilarai organised by Cultural Affairs Department at Bongaigaon, Chief Minister Sonowal reiterated the various measures like setting up of Chilarai Cultural Project, building two statues of Chilarai at Rakhaldubi and Golakganj, establishing Chilarai Information and Research Centre at Chepakhowa have been chalked up in the Budget which indicate the government’s commitment to preserve the glory of Bir Chilarai for posterity.

Stating that Chilarai was not only his elder brother King Nara Narayan's commander-in-chief who played crucial role in expanding the Koch Empire, Chief Minister Sonowal said that Chilarai was a visionary who envisaged an unified Assam and his gallantry and patriotism were unparallel.

Quoting noted historian Arnold J. Toynbee who considered Chilarai as a famous warrior of the world, Sonowal said if Srimanta Sankardeva and Madhabdeva were not given patronage by Koch King Nara Narayan and his brother Chilarai, Assamese culture and literature would have been at a loss because only due to their Royal Patronage Sankardeva was able to establish the “Ek Saran Naam Dharma” in Assam and bring about his cultural renaissance.

Referring to the Chilarai’s ideals of protecting the environment and maintaining harmony among all sections of the society Chief Minister Sonowal said that the government is making all efforts for achieving inclusive growth of the state following the ideals of great Koch General.