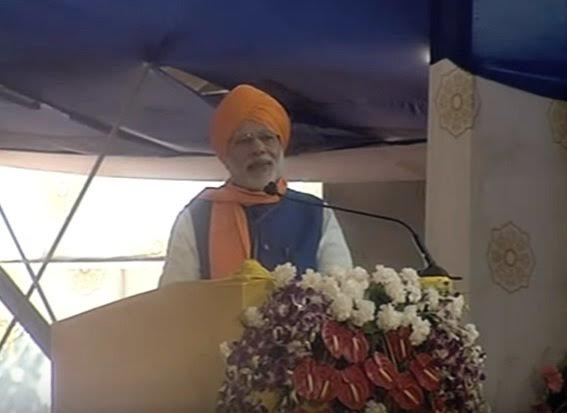 Guru Gobind Singh is an inspiration for all: PM Narendra Modi

Addressing a function organized at Patna’s Gandhi Maidan to commemorate the 350th birth anniversary of the 10th Sikh Guru, the PM said the Prakash Parv conveys a message of unity and communal harmony.

Modi also thanked Bihar chief minister Nitish Kumar for the magnificent arrangements for the event and also praised for the effort he has undertaken to save future generations from alcoholism.

He said, “People from Bihar have distinguished themselves and served the nation." He also said that Bihar will play a major role in the development of the nation.

More than 400,000 Sikha devotees from home and abroad have already reached Patna to be a part of the grand event being held to mark the birth anniversary of 10th Sikh Guru, who spent his early childhood days in the lanes and bylanes of Patna.

Guru Gobind Singh was born on December 22, 1666, to ninth Sikh Guru, Guru Tegh Bahadur, and Mata Gujri. He was anointed the supreme leader of the Sikhs at the age of nine, becoming the last of the Sikh Gurus.

On the site of the house in which the 10th Sikh Guru was born and where he spent his early childhood, now stands the sacred Harimandir Sahib– one of the five most honoured seats of religious authority for Sikhs.

The Gurudwara was built by Maharaja Ranjit Singh in remembrance of the Guru.