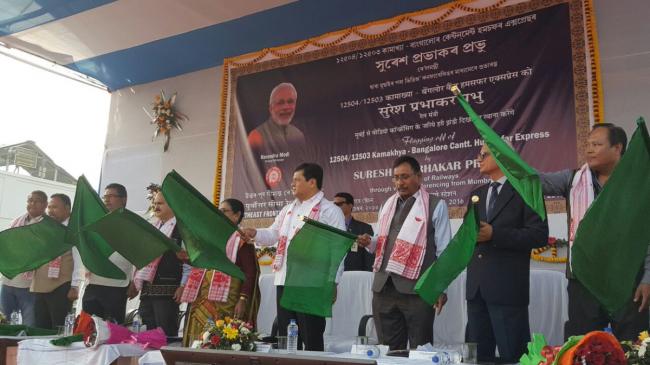 The full AC 12504/12503 Kamakhya Bengaluru Cantt. Humsafar Express has been introduced as a part of budgetary commitment of the Centre, as the train includes all the facilities which are otherwise not available in normal AC-3 tier coaches.

Speaking on the occasion, Chief Minister Sonowal thanked Prime Minister Narendra Modi and Railway Minister Suresh Prabhu for linking Guwahati with Humsafar Express service which according to him will strengthen the link between North East and South of the country.

Initiating infrastructural development of railways in full throttle in Assam and other North Eastern States will give a boost to Centre’s Act East Policy, as Sonowal urged upon Centre to expeditiously complete all major and minor railway projects in Assam.

He also requested Railway Minister to create an inroad for incorporating ‘Majuli’ into railway map of the country as he also underlined the need of linking all the districts in the State with the Railways.

He also reiterated the State Government’s commitment of transforming Assam into a State where good governance holds the key for state’s development.

Sonowal assured to give all support to the Railways in all its projects.

Union Minister of State for Railway Rajen Gohain who also spoke on the occasion gave a detailed overview of the different rail projects that have been going on in North East and stressed on their timely completion.

He informed that electrification work of train running will also be started soon in the state.

Member of Parliament Bijoya Chakraborty and Biswajit Daimary, General Manager of NF Railway Chahatey Ram, several MLAs and other dignitaries were present on the occasion.