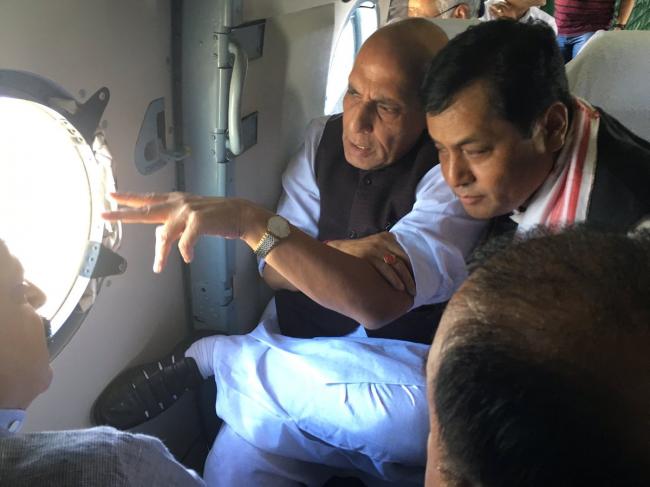 Rajnath Singh, after review, expressed his satisfaction on the preparedness of the Central and State agencies in handling the devastating cyclone which has resulted in minimising casualties.

He ordered to keep the Inter-Ministerial Central team ready to be sent to Tamil Nadu immediately on receipt of the Memorandum from the State Government.

The DG NRDF informed that 8 teams of NDRF consisting of 268 rescuers along with 29 boats have been deployed in Tamil Nadu.

Three more teams of NDRF consisting of 108 rescuers along with 15 boats have also been sent to Chennai.

Six teams of NDRF consisting of 205 rescuers along with 20 boats have been deployed in Andhra Pradesh.

"As per status report at 10 am, in Tamil Nadu, total 297 relief centers are opened and 104 are in operation. 13,578 persons are evacuated to shelters and human losses reported 16, hut damages 55, trees fallen 9,154, electrical poles damaged 5,200, transformers damaged 71 and out of 312 road blocked 152 have been cleared," read a government statement.

"In Andhra Pradesh, total 59 relief centers are in operation 10,960 persons are evacuated from vulnerable/low lying areas in Andhra Pradesh. Human loss reported 2 in Chittoor, 391 villages affected, 602 poles fallen, 12 trees uprooted. All uprooted trees have been cleared and lifting of poles is in progress," it said.

As per IMD bulletin issued in the morning, the Deep Depression over north Tamil Nadu moved further west-southwestwards during past 06 hrs with a speed of 20 kmph, weakened into a depression and lay centered at 0530 hrs today morning, over north interior Tamil Nadu near Latitude 12.5ºN and Longitude 78.0ºE, about 50 km west of Tiruppattur and 40 km north of Dharmapuri.

The system is very likely to continue to move west-sothwestwards and weaken gradually into a well marked low pressure area during next six hours.