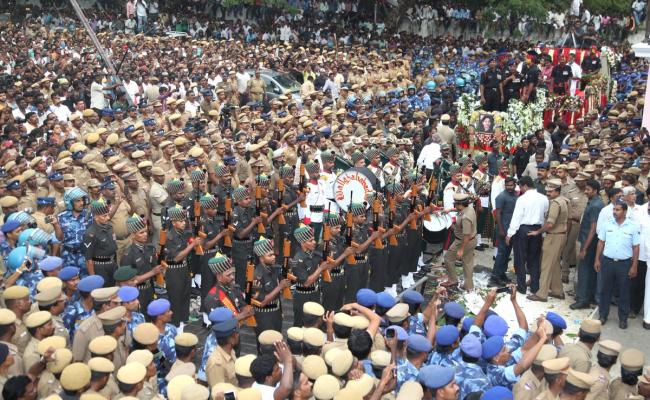 The southern leader, who passed away on Monday, was buried and her sandalwood casket was laid to rest near to the memorial of her mentor MG Ramachandran.

Her last rites was performed by her close aide  Sasikala Natarajan.

The sandalwood casket is being closed.

A sea of people paid homage to the leader as her body, draped in the tricolour in a glass casket, was kept at the Rajaji Hall earlier for public viewing.

Huge crowd of people followed her procession as it was brought to the Marina Beach later.

Modi placed a wreath on the mortal remains of the leader and consoled Jaya's close aide Sashikala who was in tears.

A national mourning has been declared in India while both of House of Parliament were adjourned for the day after paying a tribute to the late leader.

Her body has been kept draped in a green saree, one of her favourites as mourners paid visits in thousands and many cried "Amma" and wailed and beat their chests.

A six-time Chief Minister, Jayalalithaa, popularly known as Amma among her followers, breathed her last at Chennai's Apollo Hospitals at 1130 pm Monday after a 75-day long fight. She suffered a massive cardiac arrest on Sunday and finally succumbed after being in life support.