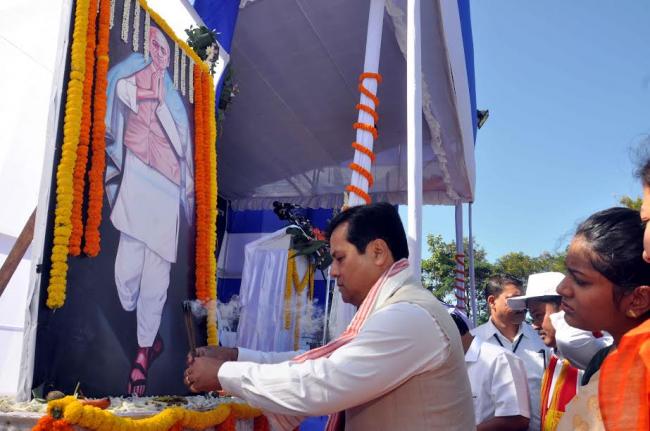 
Recalling Patel‘s contribution on this occasion in a programme held at Choukidingi Playgroun in Dibrugarh, Assam Chief Minister Sarbananda Sonowal urged the people of Assam to emulate his ideals for strengthening unity and fraternity in the state.

Sonowal said that the present mosaic of Indian democracy owe a lot to Patel.

The Iron Man of India was not only instrumental in the merger of princely and small states in Indian Republic but also the solid force behind the foundation of Indian Democracy,” Sonowal said.

The Assam CM also evoked his apt handling of post partition migration, unification of states and his role in industrialization in the country.

Stating that the Union government pays due importance in promoting the ideals of great leaders like Patel for building a vibrant nation, Sonowal urged the people of Assam to imbibe such ideals for a resurgent state.

The Assam CM said that Assam has its own share of problems but the resources, possibilities and potentialities outshine those problems.

He further said that the Govt. of Assam will work harder for an amiable and unified Assam and will effectively safeguard the identity and culture of the indigenous people.

Sonowal further urged the people to keep strict vigil on the functioning of the state government and sought cooperation from all to solve their problems.

He said that the government is committed to ensure “Sabka Saath, Sabka Vikas” by building the spirit of “Team Assam” amongst the people of the state.

Noted litterateur Dr. Nagen Saikia speaking on the occasion lauded Sardar Petel’s role in strengthening unity and to embolden integrity amongst the Indians.

Dr. Chandan Sharma, Associate Professor, Department of History of Dibrugarh University while delivering his keynote address on the occasion termed Sardar Patel as a farsighted practical person. Dr. Sharma also highlighted Patel’s contribution in nation building and his role as a parliamentarian.

On the occasion of Rastriya Ekta Divas, an oath was also administered to the gathering for upholding unity and integrity of the country.