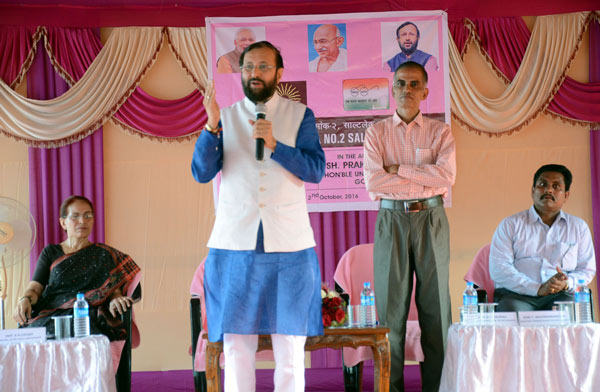 "This has become mandatory to do away with the evil of plastic waste which has become a major hindrance in clean India drive," Javadekar said in Kolkata on Sunday.

He was speaking at a Swachh Bharat Abhiyan event organised to mark the birth anniversary of Mahatma Gandhi at Kendriya Vidyalaya No. 2 at Salt Lake.

"This will be a true homage to Bapu who dreamt of a clean India,"Javadekar said.

Javadekar on this occasion launched the ‘‘Plastic Waste Free Kolkata’’ drive by leading a team of school students and cleaning the IC Block school vicinity at Salt Lake.

He pointed out that only the nine thousand tons of plastic waste is collected and sent away for treatment out of the 15 thousand tone produced daily in India.

"This imbalance leads to a daily addition of a load of six thousand tones untreated plastic waste, which is not biodegradable, on our civic systems causing unmanageable harm to our environment and the cleanliness drive. The only way out, therefore, is rendering of a helping hand by all citizens to our civic bodies who are struggling hard to manage the additional load of e-waste and bio-medical waste that are highly hazardous," he said.

Asked on the sidelines of the Swachh Bharat Abhiyan event by media-persons, Javadekar said the surgical strikes conducted by India on the terror launch pads in PoK following the Uri attack has sent a stern message to Pakistan.

"The Indian action has put forth the zero-tolerance policy of the Union Government towards terrorism," he added.