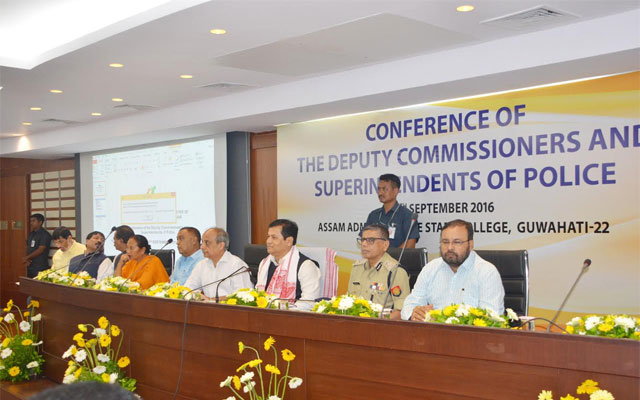 India Blooms News Service | | 29 Sep 2016, 07:35 pm
#Assam, #Sarbananda_Sonowal, #Kaziranga, #Free_encroachment
Guwahati, Sept 29 (IBNS): Lauding the efforts of Deputy Commissioner (DC) and Superintendents of Police (SP) of Nagaon District in removing the encroachers from a portion adjoining Kaziranga National Park as per the directive of Gauhati High Court, Assam Chief Minister Sarbananda Sonowal on Thursday called upon DCs and SPs of all districts to be proactive in freeing state lands from encroachers.

Sonowal called upon the officials to be fearless and free from any pressure to act sternly against encroachers and said that people of the state have shown tremendous support to the government in freeing the Satras and forest lands from encroachment.

Speaking at the conference of DCs and SPs held at Assam Administrative Staff College Khanapara on Thursday, the Assam CM said that the efficiency and honesty in performing one’s duties will determine the success of an administrator.

Terming the NRC updation process as critical for the state as well as the nation, Sonowal directed the top officials of the districts to complete the historic process meticulously and without any error.

Reiterating that the sealing Indo-Bangla Border is a top priority for the government, Chief Minister Sonowal said that the security of the whole country would be compromised if the border is allowed to remain porous.

“The matter has been taken up with the Central Government in right earnest and Army would be called in to construct the border fencing,” Sonowal said.

The Assam CM said that the DCs and SPs must visit the interior rural areas personally to get an exact sense of people’s expectations from the government system and must come up with ways to ensure swift service delivery.

Referring to the recent army worm attack on the farm lands of the state, Sonowal directed the DCs to be better prepared for tackling such menaces in the future.

The Assam CM urged the officers to work sincerely for the benefit of the people and they must ensure that the common people’s grievances are redressed with priority and sincerity at all government offices.

The dignity of the poorest person coming to a government office must be upheld at any cost so that faith of the people on the government system remains intact.

Calling upon the SPs to inspire the police personnel to adopt healthier lifestyle to remain fit Sonowal said that the police uniform must instill fear among the anti social elements and inspire trust in the common citizens.

“Police force must be able to motivate the younger generation to dream to get into the service in order to commit to the cause of the society,” Sonowal said.

The Assam CM said that on many occasions people have complained about the corruption in the government system and slow nature of work at government offices.

He called upon the DCs and SPs to set an example of dedication towards one’s duty and remove corrupt practices totally from the system.

Sonowal said that a policing mechanism for the char areas of the state is being planned and asked DCs and SPs to share their inputs for successful implementation of the same.