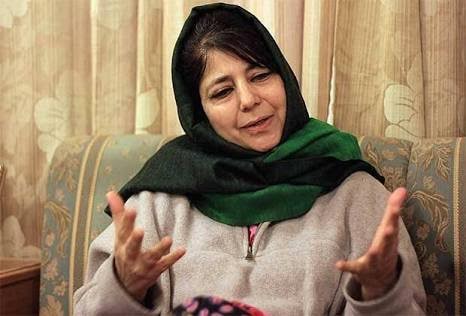 “It (Kashmir issue) is an complex problem and a chief minister or a prime minister can’t overnight come up with a solution to this multi-dimensional challenge. What is required is a serious, concerted and inclusive effort at diplomatic and political levels through an institutionalized mechanism to resolve the issue,” the Chief Minister said while addressing a function after laying the foundation of the new building for Government Degree College, Bhalwal here.

The Chief Minister appreciated the efforts of the All Party Delegation to reach out to various shades of political opinion in Jammu and Kashmir and added that it depicts the true essence of India’s vibrant democracy.

She said shutting doors on the All Party Delegation is not going to help anyway.

“Instead of being caught in darkness, the separatists should have met the members of the All Party Delegation and put across an implementable roadmap for the resolution of the issue,” she said and added that by shying away from talks, a message has gone around that the separatists are not interested in ending the people’s miseries by coming forward for peaceful resolution of the issue.

Mehbooba said as the resolution adopted at the All Party Meeting in New Delhi on Wednesday has reiterated the urgency of engagement and dialogue in Jammu and Kashmir, "we hope a fresh and productive effort would be made by the country’s political leadership to reach out to all the stakeholders in the State to address the issue through inclusive and comprehensive engagement.”

She expressed the hope that the separatists would also respond positively to the fresh initiative to end the decades old political uncertainty in J&K, which has left behind a trail of tragedies in almost every home in Kashmir.

Mehbooba said that violence is no solution to any problem, rather reposing faith in the dialogue process is the only way out to address the issues.

She said that governance and political process should go hand in hand to overcome the tough times that the state is presently passing through. “The people of Jammu and Kashmir, irrespective of their age, gender, status or the political affiliation, have been suffering the disastrous consequences of the turmoil and unrest and they have to be retrieved from this blood-spattered quagmire, sooner the better,” she said and added that the onus lies on all the stakeholders.

Maintaining that the relations with Pakistan strongly impact the situation in Jammu & Kashmir, Mehbooba said this was aptly understood by the former Prime Minister Atal Bihari Vajpayee and Mufti Mohammad Sayeed who worked tirelessly to resolve the issue through confidence building measures, both on internal and external fronts.

“If anything was achieved in Jammu and Kashmir since the partition of the subcontinent, it was between 2002 and 2005 when cross-LoC roads were opened for movement of people and goods and there was peace along the borders,” she said and added unfortunately, after former PM Vajpayee demitted office in 2004, there was no substantive movement forward on the peace and reconciliation initiatives taken by India and Pakistan vis-à-vis Kashmir leading, once again, to an era of cynicism and alienation in the Valley.

Mehbooba said with a robust mandate on his back and the country’s political leadership, cutting across the divide, fully supportive of reviving the peace and reconciliation process in and around Jammu and Kashmir, Prime Minister Narendra Modi has the opportunity to resolve the Kashmir issue in the interest of the peace and stability of the State and the region.

The Chief Minister said that it must not have ever happened that in a period of two months the Union Home Minister visited a State thrice to reach out to the people and work out a way to address the issue.

She also appreciated the initiative of the Union Government to appoint a Nodal Officer to look into the grievances and concerns of Kashmiri students studying in various parts of the country.

The Chief Minister said the Government has faced difficult times in Kashmir and yet ensured that people have access to healthcare and are provided with basic amenities like ration, power and water.

She appreciated the Department of Health especially medics and paramedics for tirelessly attending to their duties and caring for the people.

She also complimented the Education Department and State’s administrative machinery to conduct various competitive examinations and to make it possible for the students to appear in such exams.

The Chief Minister reiterated that the present Government, based on its Agenda of Alliance, is working on a comprehensive developmental road map to ensure equitable development of all the three regions of the State.

She added that various projects that were left in limbo were ensured to see the light of the day. She said that it is the State Government’s vision of developing Jammu as an independent tourist destination and bringing the State on the world map as the number one tourist destination.

She said that the Government is committed to enhance the job avenues for the youth and increase employability.

She also appreciated the people of Kashmir for their cooperation in the smooth conduct of the Amarnathji Yartra showing the cultural essence of Kashmiriyat.

Mehbooba appreciated the people of Jammu for having maintained peace and tranquility in the region during this period.

She said that we are all interdependent and interconnected and anything happening in one corner of the State affects the other either directly or indirectly.

Mehbooba added that it is thus important to maintain brotherhood and the spirit of oneness that binds us together and that this bond of trust and amity was further strengthened when people coming down to Jammu from Kashmir were given a warm welcome making them fell secure and at home.

The Chief Minister reiterated that the present Government, based on its Agenda of Alliance, is working on a comprehensive developmental road map to ensure equitable development of all the three regions of the State. She added that various projects that were pending have been completed.