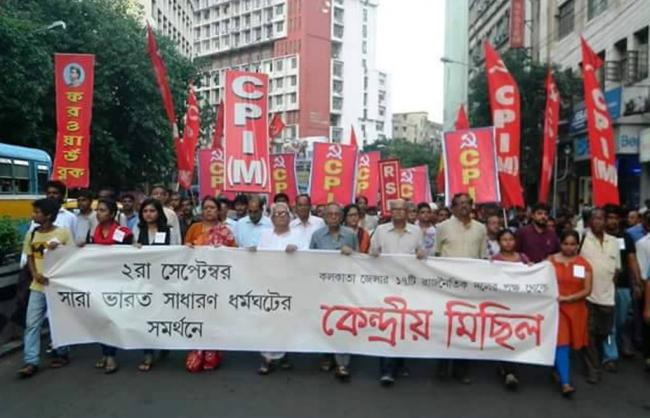 Left leaders claimed that a large number of people would observe the day-long strike on Friday, to support their demands.

Meanwhile, the Central government and other state governments have taken several plans to foil the countrywide strike.

In West Bengal, Chief Minister Mamata Banerjee said that no strike would be observed in the state and strictest action will be taken if strike-supporters forcefully try to make their bandh successful.

During a press conference here at state's main administrative building Nabanna in Kolkata on Thursday, Banerjee said, "As strike is not a proper solution, our government will not entertain any strike in Bengal."

"Drive your cars and open your shops tomorrow. If bandh-supporters damage those, govt will provide compensation," she added.

Meanwhile, a possibility of political violence between pro and anti-strike has been triggered as strike-supporters and strike-opposers have said that they would take position on state roads to observe and foil the day-long strike respectively and the ruling Trinamool Congress (TMC) has already announced to celebrate the Supreme Court's verdict on Singur land acquisition in entire West Bengal on Friday.

The Kolkata Police and state police have taken several arrangements to secure the roads on Friday.

"Police pickets will be set up at 357 points in the city and a large number of police force, including our officials, will be on the roads of Kolkata tomorrow to provide security to the commuters and to avoid any untoward situation or political clash," a senior official of Kolkata Police told IBNS.

(Reporting by Deepayan Sinha from Kolkata)