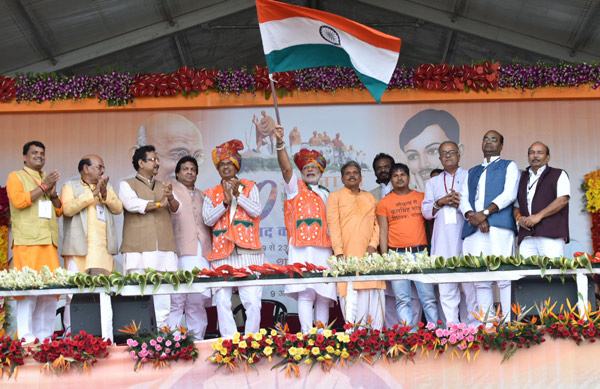 The Prime Minister garlanded the statue of Shahid Chandrashekhar Azad and visited the memorial at his birthplace.

Addressing a public meeting, Modi recalled that Mahatma Gandhi had given the call for the British to Quit India – this very day.

He urged to people to remember those who gave their lives so that we could breathe the air of freedom.

The Prime Minister said it is his privilege to have come to the birthplace of Chandrashekhar Azad.

"People like him inspire us to work for the nation," he added.

The Prime Minister said,"All of us, who may not have got a chance to lay down our lives for the nation, should take the opportunity to live for the nation."

He emphasized that a nation moves forward on the strength of its people, their aspirations, and their hard work.

He said a few misguided elements were attempting to spoil the great traditions of Kashmir.

The Prime Minister said the Union Government wants to create employment opportunities for the youth of Kashmir.

He appealed to the youth of Kashmir to come forward and move ahead with the vision of making Kashmir “heaven on earth.”

Modi said Kashmir wants peace and the people of Kashmir want to earn more through tourism.

He said both the Centre and the J&K State Government are attempting to find a solution to all problems through development.

Modi said the need of the hour is for all of us to work together with a common resolve to take the nation to new heights.

He said the Indian tricolour unites us, and inspires us to rewrite India's destiny.

The Prime Minister later flagged off the Tiranga Yatra to mark the launch of the 70th Freedom Year celebrations.