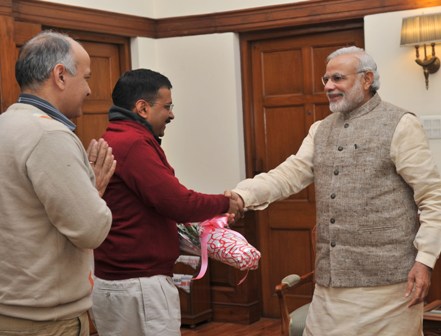 They were arrested earlier in the day during a march towards Prime Minister Narendra Modi's residence to protest the arrest of party legislator Dinesh Mohaniya on Saturday.

Protesting against the detention, Sisodia had earlier tweeted: "Modiji, you have arrested us and kept us in Parliament Street police station. But, we are ready to even go to the Tihar jail. Do not stop the work in Delhi."

He was arrested on charges of molestation and sexual harassment.

Delhi Chief Minister Arvind Kejriwal on Saturday slammed  Prime Minister Narendra Modi for the arrest of Aam Aadmi Party (AAP) legislator Dinesh Mohaniya in the middle a news conference, saying an 'Emergency' has been declared in the capital.

"Modi declares emergency in Delhi. Arresting, raiding, terrorizing, filing false cases against all those whom Delhi elected," Kejriwal had tweeted.

His outburst comes after the arrest of  Mohaniya, the legislator from Sangam Vihar,  for allegedly misbehaving with a group of women who had gone to him to complain about a water crisis.

Mohaniya, who is also vice chairman of Delhi Jal Board, was picked up by a police team while addressing a news conference at his office in Khanpur in South Delhi.

Mohaniya was also booked in the case of allegedly assaulting a senior citizen.