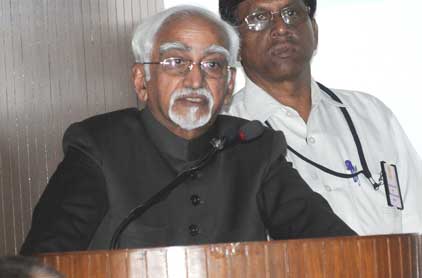 Threat of terrorism should be addressed through international cooperation: Vice President

He was addressing a Press Conference Onboard Special Aircraft Air India on his way back from the official visit to Morocco and Tunisia, on Saturday.

The Vice President further said that the visit to Morocco and Tunisia was satisfying and that had very good discussions with both countries on vast area of issues including terrorism.

With Tunisia, the Vice President said that both countries have agreed to rejuvenate the relationship and focus on areas which have been identified.

There will be a sharper focus on these issues when the Tunisian Foreign Minister visits India later this year in a Joint Commission, he added.

He further said that there excellent political understanding between the two sides and the Tunisians have been supportive of India in international fora.

The Vice President said that both countries are victims of terrorism and they were absolutely in agreement that this menace could be addressed with international cooperation for which they were willing to work bilaterally.

The Vice President said that during the visit, the focus was also on trade and technology. In both Morocco and Tunisia, some of our new initiatives in Africa have received attention and certain triangular tie-ups could take place. Overall, the reception was very warm and friendly, he added.

Reacting to a question on terrorism, the Vice President said that each country has to fight its own battle on terrorism because terrorism is 'international'. Counter terrorism should also have its international dimensions and sharing the information on a timely basis is critical, he added.

On a question about high unemployment in Tunisia, the Vice President said that the Government there is very much aware of the problem.

He further said that our contribution can be doing more business with them and thereby creating more employment and some Indian companies are already present there. There is also a great potential in developing tourism, he added.