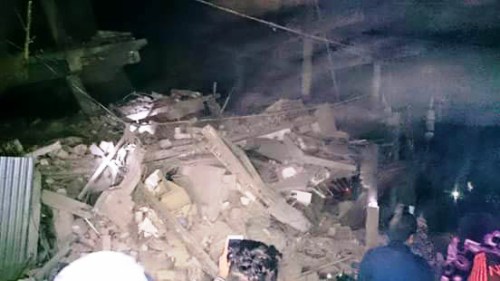 India Blooms News Service | | 04 Jan 2016, 09:23 am
#Earthquake, # Manipur earthquake, # Imphal quake
Imphal/Guwahati Jan 4 (IBNS) At least five people were killed and more than 50 others injured when an earthquake measuring 6.7 on the Richter Scale hit Manipur in the Northeast on Monday, officials said.

The deaths occurred from building collapses in Imphal town, the capital of Manipur. A death also was reported from Guwahati in Assam under the impact of the quake.

The epicentre of the quake measuring 6.7, which was felt at 4:35 hrs and at a depth of 17 kms, was located  at latitude 24.8 degrees north and  longitude 93.5 degrees east, the  India Meteorological Department (IMD)  website said.

The IMD has called the earthquake as 'moderate'.

The United States Geological Survey (USGS) website said the intensity of the quake was 6.8.

Damage to property due to the earthquake has been reported from Imphal.

Police said several buildings have been damaged in the area.

"Spoke to Rajnath ji, who is in Assam, on the situation arising due to the earthquake & asked him to oversee the situation," Modi tweeted.

"Had a telephone conversation with Assam CM Shri Tarun Gogoi on the earthquake in the state & the region," Modi said.