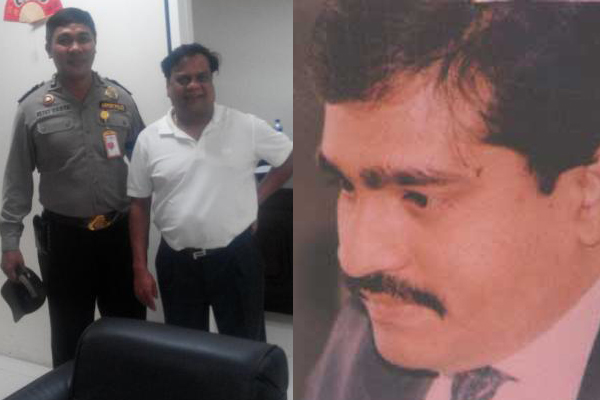 I am not afraid of anyone : Gangster Chhota Rajan says on Dawood Ibrahim

"I am not afraid of anyone," he said on Wednesday responding to  NDTV's question on underworld don Dawood Ibrahim. Rajan, 55, made the comment while being led away by the police in Denpasar in Bali, where he was arrested on Sunday. Speaking to NDTV, Police Commissioner Reinhard Nainggolan has said that Rajan wanted to go to Zimbabwe. "He asked us to release him as he wanted to go to Zimbabwe. He said that he lived in Australia and before that in Zimbabwe and wanted to go there. He was looking to escape," said the officer. Reports have suggested that Rajan, who has been hunted by the police in many countries, was scared to return to India because of threats from Dawood, his former mentor turned bitter rival. Rajan, kept at a local police station away from the media, is very nervous, Mr Nainggolan said.  "He is looking scared. He keeps smoking constantly. He said he didn't want to go to India as his wife and father had died." Rajan's wife Sujata Nikalje, however, is alive. According to NDTV reports, he has also been found to be medically fit, which contradicts speculation that one reason the gangster wanted to return to India was because of his liver and kidney problems. Rajan is wanted in India for at least 17 murders and cases of arms smuggling, drug trafficking and extortion. He was arrested on Sunday morning as he stepped off a flight from Sydney. The police say that seven of their officers and five from immigration went up to Rajan and arrested him after his details matched with a 20-year-old Interpol red corner notice. "In Australia, a red corner notice is not sufficient to arrest a person. But under Indonesian laws we can. Now within 20 days we will have to deport him back to India,"  Nainggolan told NDTV. Rajan, born Rajendra Sadashiv Nikalje, was using an alias, "Mohan Kumar". He had claimed he was on holiday, but the police find it suspicious, given the Interpol notice and threats from Dawood. "As a detective, I don't believe he was here for a holiday," said the commissioner.